‘A showcase of what could happen across the country’ 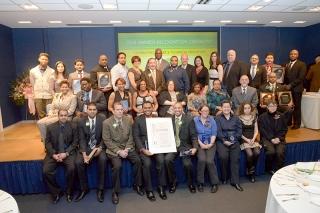 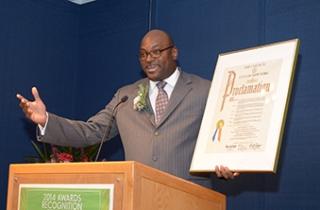 “We’re second to none in CTE,” UFT Vice President for Career and Technical Education High Schools Sterling Roberson said of New York City. “We’re a showcase of what could happen across the country.”

CTE teachers are at the heart of that success, Roberson said, as he kicked off this year’s CTE Awards Recognition Ceremony on Feb. 6 at the UFT’s Shanker Hall.

More than 35 educators, chosen by students and colleagues, were honored by the union and its industry partners at the event.

UFT President Michael Mulgrew, a past vice president for CTE high schools, extolled the night’s awardees for their ability to inspire their students.

“When you see students engaged in a whole different setting, a student who all of a sudden lights up, that’s what CTE is all about,” Mulgrew told the more than 400 educators, students, friends and family in attendance.

Business of Sports School entrepreneurship teacher Clarence Tennell took home both a UFT 2014 Outstanding CTE Teacher award and one of two Teacher of the Year Awards given out by the Municipal Credit Union.

“At the Business of Sports School, we try to teach kids the other side of sports besides being on the field,” Tennell said. “We teach them to understand the nuances of finances, hiring and firing employees, and economics.”

Tennell’s students, who compete in both in-school and regional business-plan competitions, have taken those lessons to heart. One student with a disability organized a series of athletic events for disabled children and adults, attracting a Nike-sponsored team from Texas to one event, Tennell said.

Tennell’s sister, who presented him with his award, spoke of his devotion. “Whenever I ask, ‘Where are you? What are you doing?’ he’s with his students,” she said.

Diane Shoemaker, the Business of Sports School’s founding business teacher, also took home an award, for her work supporting and involving her students in the 2013 Big Apple Classic basketball game and leadership summit. Shoemaker’s students participated in the summit at The New York Times building and shadowed organizers of the college fair held at the Barclays Center.

“It felt great to be recognized,” she said.

Another honoree, UFT delegate and Thomas A. Edison HS computer repair teacher Alex Bell, said that the “spark” he gets from his students in class every day is “award enough,” but that he was flattered to have his hard work acknowledged by his union and colleagues. Bell took home both a 2013 Big Apple Classic Award and a LearnKey Award for his work with industry partners in his field.

“Kids need to be empowered. You can’t tell them to sit in class and do textbook work every day,” Bell said. “You need to be creative.”

Ariff Hajee, who teaches science, construction trades and carpentry in the DOE’s Pathways to Graduation GED program, was also among the award winners. He described the delight it brings him when his CTE classes attract the intense interest of his overage and under-credited students. He said that while his ultimate goal is for his students to receive their GEDs, hands-on classes play a big role in helping them get there.

“CTE is really the applied portion of science,” Hajee explained. “With science I can talk about it but I can’t do experiments with everything, whereas CTE is one big experiment.”