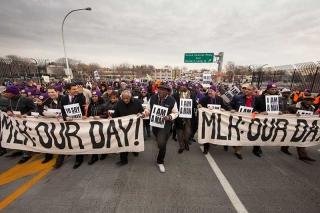 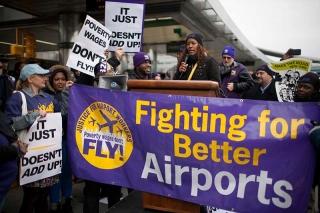 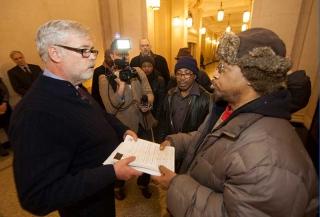 Air travelers encounter many different kinds of workers in airports — from baggage handlers to security officers and cabin cleaners. As travelers stand in line or rush to a boarding gate, they may assume that the various uniformed workers they see are employed directly by the airport or the airlines. They may also assume, considering airport security issues, that all these workers earn a decent wage.

But they would unfortunately be wrong.

Many workers who help keep U.S. air travel secure and running make up an airport underclass: a tier of workers employed by airline subcontractors who struggle to survive on low wages and minimal benefits.

The growth of this underclass hurts workers and their communities and should concern airline passengers and the greater public, say University of California at Berkeley researchers in a recent report: “The corrosive effects on workforce professionalism can undermine the safety, security, and efficiency of the air transportation system.”

Workers with the help of unions are fighting back, and at New York City airports they have won some recent victories.

Jackson, 56, works as a security guard in Delta’s terminal at JFK International Airport, but he isn’t employed by the airline.

He works for a Delta subcontractor, Air Serv, which even after employing Jackson for four years pays him just $8 per hour. Jackson’s take-home pay is a paltry $250 per week, which he uses to pay for his rented room, phone service and laundry. He depends on his church for food.

Jackson earns these poverty wages despite working at one of the most important jobs in the airline industry, protecting passenger safety.

Private subcontracted security officers such as Jackson are often responsible for securing airport entrances, guarding terminals and the initial screenings of travelers before the passengers go through checkpoints staffed by federal transportation security agents.

“We’re responsible for all of the security at Delta’s terminals,” Jackson said. “If we don’t do our jobs correctly, bad people could get into sensitive areas.”

Jackson is part of the airport worker underclass that was born through the deregulation of the airline industry that began in the late 1970s. It grew as airlines over the last two decades drove down labor costs by outsourcing jobs.

The number of baggage porters employed by subcontractors, for example, has more than tripled over the last 20 years from 25 percent to 84 percent. As a result, the average wages of both contracted and directly employed porters have dropped precipitously, from more than $19 an hour to $10.60.

Across the industry, airport workers saw their real hourly wages fall an average of 15 percent between 2002 and 2012 as a result of outsourcing.

In 2011, airport workers in ground-based jobs that include baggage handlers and vehicle, equipment and terminal cleaners made an average of just $545 per week.

But it’s workers like Jackson, employed by airline subcontractors, who have it the worst. While he makes just $8 an hour, Dolores Holman, another JFK security guard, earns $17.43 an hour. The difference is that she is employed by a subcontractor of the Port Authority of New York and New Jersey, which runs the region’s airports.

“It shouldn’t just be me making this kind of money because I’m doing security through the Port Authority,” Holman told the Daily News. “I feel like we should all be making the same amount so everybody can survive. Why should it just be me?”

Hector Figueroa, the president of 32BJ SEIU, the state’s largest service workers union, which is helping airport workers fight to improve wages and working conditions, denounced the wage disparity at JFK and other area airports.

“A world-class airport cannot abide a two-tier wage structure,” Figueroa said. “All these jobs need to be good jobs, with fair, family-sustaining wages and affordable benefits.”

Figueroa’s union already represents roughly 1,000 security guards working for Port Authority subcontractors. Part of the fight, he said, is to stem the race to the bottom that the airlines’ outsourcing has caused.

Under pressure from workers, union leaders and politicians including Gov. Andrew Cuomo, Port Authority Executive Director Patrick Foye on Jan. 27 sent a letter to the four major airlines at New York-area airports directing them to immediately grant all airport workers earning less than $9 per hour a $1-per-hour increase, with an eventual phase-in to $10.10 per hour.

So far, only Delta has agreed to Foye’s terms. Even so, it’s a tremendous victory for New York’s airport workers: More than 2,000 low-wage workers employed by Delta’s contractors at LaGuardia and JFK will receive their $1 increase on March 1 and could see their hourly wages increase to $10.10 as early as the end of April.

Jackson, the JFK security guard, described the improvements as “just the beginning.”

“A much higher wage, an affordable health plan, paid sick days, paid time off — that would be a very good start for us,” he said. “We want to have higher standards and we want it in writing.”