In a momentous victory for community and student activists working in tandem with the UFT, the Department of Education on Jan. 23 withdrew proposals to widen Success Academy's footprint in city public school buildings in Queens and the Bronx that critics had warned would harm the educational progress of the students already in them.

Schools Chancellor David Banks issued a statement indicating that community opposition to the proposed co-locations at two campuses in southeastern Queens and a building in the northwest Bronx was the decisive factor in calling off the votes by the citywide Panel for Educational Policy.

"I'm glad that they finally listened to the voices of the stakeholders: the parents, the children, the educators, the community," said Ehimanre Ebhomielen, the chapter leader for Preparatory Academy for Writers, one of four schools based at the Springfield Gardens Educational Complex in Queens. "It was going to take away resources from those who needed them most."

Kelli Dallas, the chapter leader for Leaders for Tomorrow, one of the two Bronx middle schools on the Richard Green campus where Success Academy wanted to put a new elementary school, said the united opposition to the Bronx co-location proposal was fundamentally about not harming the public school students. "I don't think our community is saying no to charter schools," she said. "It's saying no to co-locations."

Dallas said she believes the chancellor changed his mind once students at the affected schools got "politically involved" against the co-locations. "When I heard the kids speaking," she said, "his decision was right on time."

UFT Queens Borough Representative Amy Arundell said she was "really proud" of how UFT members in the affected schools in the two boroughs came together with community members and elected state and city officials.

"We used our common concern and diversity of voices to amplify the struggle," Arundell said. "All of us playing our roles got us to this moment — that was why it was so powerful."

In a statement hailing the withdrawal of the proposals, Queens Borough President Donovan Richards said New York City public school students "have been forced to endure years of systemic disinvestment in their schools, punctuated by a seemingly endless cycle of co-locations that further devalues the education our children receive."

Under legislation pushed through by then-Gov. Andrew Cuomo nine years ago at the height of his feud with Mayor Bill de Blasio, the DOE must either provide charter schools with free space in its own buildings or pay their rent in private buildings. Success Academy founder and CEO Eva Moskowitz, a close political ally of Cuomo and now Mayor Eric Adams, has been the charter operator most keen on co-locations.

Some critics accuse Moskowitz of trying to gin up demand by the stark contrast between the high-gloss charter schools outfitted by her well-endowed chain and the under-resourced public schools in the same building.

Jason Hunter, an Advanced Placement biology teacher at Excelsior Preparatory HS in Springfield Gardens, testified at a Dec. 15 hearing on the proposed co-location that Success' arrival would "highlight the disparities in resources between public schools and charter schools." He pointed out that Success Academy had been offered a nearby site that once housed a parochial school and rejected it.

Public school advocates, however, draw a different distinction between Success Academy charter schools and public schools. "We take in students that have been let out of charter schools, that come from all sorts of economical and sociological statuses, and see them shine," said Dallas, the Bronx chapter leader. "That's what we do."

In late 2022, the PEP approved Success Academy co-locations at a school building in Far Rockaway, Queens, and one in Sheepshead Bay, Brooklyn, despite local opposition.

The community outcry became even louder against the next three proposals headed to the PEP for a vote. Student walkouts and powerful testimony at December hearings on those proposed co-locations triggered negative publicity that intensified the questions about the wisdom of the potential incursions.

School leadership, faculty and public school families from the affected Queens and Bronx schools argued that contrary to DOE claims that Success would be moving into underutilized buildings, the schools were using their space to serve students in a variety of ways and the co-locations would force the sharing of common spaces like auditoriums, gyms and cafeterias to the detriment of the public school students.

Members of these school communities also noted that their schools will need more space starting in September — when Success was hoping to open its new schools in their buildings — because of the new law reducing class size. Several affected schools also would have risked the loss of federal grants that are contingent on continued growth in student enrollment.

At one hearing in Queens, Barbara Lewis-Williams, the first vice president of the Community Education Council for District 28, said the co-location push didn't square with Chancellor Banks' previous pledge to be guided by community input on education decisions. "The community is saying we don't want Success Academy in our schools," she testified. "When are our voices going to be heard?"

Not quite six weeks later, Banks responded to the community objections.

Najwa Waysome, an 11th-grader at Excelsior Preparatory HS who helped organize a student walkout and march between the two Queens campuses on Dec. 15, said she was "kind of surprised," but also very happy that the co-location was off the table. "I feel very proud," she said. "We managed to keep our school safe and keep it our own. We did everything we could to get the word out."

Moskowitz persuaded parents of students attending other Success charter schools to pack all the hearings to speak in favor of the co-locations. But in the end, it was the voices of the members of the affected school communities that resonated.

"My school has one gym, one cafeteria and one auditorium for three schools," testified one student at the Catherine and Count Basie campus in Rochdale Village. "And Success Academy is trying to cram us even more."

Zila Zac-Koswener, an occupational therapist who covers four Bronx schools, including the two at the Richard Green campus, said Success officials had been overconfident about the co-location sailing through. They went so far, she claimed, as to refurbish a girls' bathroom on the first floor of the building to put in new toilets suitable for elementary school students.

The plan falling through, Zac-Koswener said, left her "absolutely thrilled. Everyone I spoke to thinks it was amazing we could accomplish this. We're going to be celebrating the rest of the week." 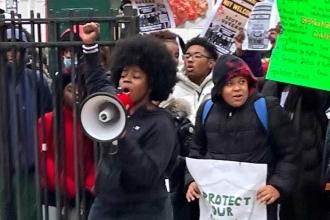 An effort by Eva Moskowitz and her Success Academy corporate charter school chain to elbow their way into two school buildings in southeastern Queens has met with unprecedented community opposition.