‘We can afford to do better’ 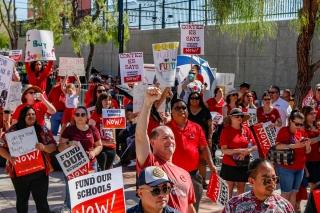 Kristan Nigro is a kindergarten teacher in Nevada who loves her job. But she’s willing to risk it all come Aug. 12, when the Clark County School District opens for the new school year.

That’s when Nigro and 18,000 other teachers in the district, which includes Las Vegas, have vowed to strike if the state doesn’t come through with funding to pay for salary increases without cuts to the classroom. Nevada law prohibits teacher strikes. Teachers could lose their jobs, and the Clark County Education Association could be fined up to $50,000 a day.

But Nigro feels there is no other choice. “I don’t have any savings,” said Nigro, a sixth-year teacher who is a member of the Clark County Education Association negotiating committee. “I have a master’s degree and I can’t make ends meet. That’s an issue.”

The Clark County School District in Nevada, the fifth largest in the country with 320,000 students and a $2.4 billion budget, is the most recent school district to be affected by the wave of teacher activism that began in West Virginia in early 2018.

As in many states around the country, school aid slashed during the 2008 recession has not been fully restored despite the economic recovery. State and local funding per student in Nevada dropped 18.6 percent between 2008 and 2015, according to an analysis by the Center on Budget and Policy Priorities.

The median pay for teachers in Nevada is $56,347, the 24th highest in the nation, while the state’s per-pupil expenditure was $8,801, the fifth lowest, according to U.S. Labor Department data from 2018.

In the latest state budget, released on June 3, the Clark County School District received an additional $53 million to pay for 2 and 3 percent raises for educators. But the school district, facing a nearly $17 million deficit, said it could only afford the pay raises if it made cuts elsewhere. On June 10, Clark County School Superintendent Jesus Jara announced he would eliminate all 170 dean positions in the middle and high schools to close the gap. Parents joined educators in vigorously opposing the cuts at a school board meeting two days later.

Nigro said cutting the deans makes no sense. “Every time they make a cut, it affects teachers,” she said. “The deans are the first line of defense in dealing with insubordinate students and other serious behaviors, like carrying firearms.”

The idea of paying for raises through further classroom cuts is unconscionable for teachers who deal every day with the lack of resources.

Nigro writes grants to purchase iPads and Chromebooks for her students. “The lack of technology is absolutely crazy,” she said.

Belknap says his top issue is overcrowded classrooms. He said he has at least 40 students in each of his U.S. government classes. It’s been that way every year since he began teaching six years ago. “It makes it difficult to build relationships with students and hard to do hands-on, engaging work,” he said.

Textbooks are outdated, too. He has been using the same U.S. government text that he had when he was a student at the school in 2009. The textbook ends with the first year of the Obama administration.

Belknap said he was heartened by the solidarity on display at an April rally that drew thousands of teachers and their supporters to the federal courthouse in downtown Las Vegas. He hopes it leads to change.

“I’m a product of this district, before the cuts and the overcrowding,” Belknap said. “We can afford to do better. We just don’t have the political will to do it.”