Helping to close the gender gap in tech 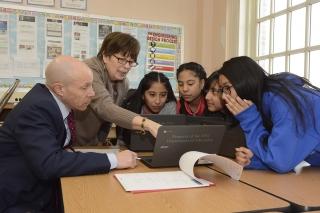 It’s hard to believe that in 2018, when women have been prime ministers and presidents, middle school girls are still confronting age-old gender stereotypes about what girls should want, look like and aspire to.

At one middle school in Queens, a unique program is fostering a culture of empowerment aimed at these young girls. Girl power is not only alive but vibrant at IS 125 in Woodside, thanks to Girls Who Code.

Girls Who Code is a national organization on a simply stated mission: “to close the gender gap in tech, one girl at a time.” Deborah Goldfisher, a teacher at IS 125, is a firm believer in empowering girls to pursue careers in computers, technology and coding. She found the perfect resource in Girls Who Code, a program that exposes girls to the world of engineering and technology. She presented a proposal to her principal, who was happy to give her the green light.

Once a week after school, 20 girls meet in Goldfisher’s classroom, open their laptops and work on their individual or group “impact” projects, something they find interesting that has a positive impact on the school community or the community as a whole. The students recently voted to focus on cyberbullying as their next topic. Now, the girls will create a webpage with material about cyberbullying, an important issue for middle school students.

I was fortunate to have the opportunity in early February to watch the students as they worked on their projects. Every one of these girls was engaged, excited and thoroughly enjoying what she was doing. The self-discovery and inquisitiveness were amazing to witness.

When I asked one of the students why she liked the program so much, she said “it is fun.” Another young woman noted that she had not really cared much for math before, but her participation in the club had changed her opinion.

Isn’t this what learning at school should be all about? We should be exposing our students to new and different things and hoping and praying that something clicks and a connection is made that can lead to greater things in the future.

In addition to working on the impact projects each week, the girls in the club also focus on one woman who was or is a pioneer in the science or technology field. The goal is straightforward: to learn about potential role models. I found out a great deal listening to the students and their teacher discuss Maddy Maxey, a coding expert who designed “smart” textiles. These textiles are used to create clothing that has circuitry built in to keep a person warm.

The Girls Who Code club at IS 125 not only empowers the young women, but also reinforces and teaches syntax, spelling, precision, order and logical thinking. All this is in addition to being “fun.”

Another impressive aspect of the club is the number of English language learners who participate. Codesters, the program Goldfisher uses, has versions in other languages, including Spanish and Mandarin.

Goldfisher said the Girls Who Code experience will help prepare her students for an engineering world dominated by men.

UFT Chapter Leader Tracey Miller described the school program to me as a “sisterhood” of young women working and learning together.

When I asked one IS 125 student why there isn’t a “Boys Who Code” club, she replied matter-of-factly, “Boys already code!”

No job field should be dominated by one gender. The world can — and should — be a level playing field. Breaking down these gender barriers is one of our many jobs as public school educators.

As Nelson Mandela said, “Education is the most powerful weapon which you can use to change the world.”