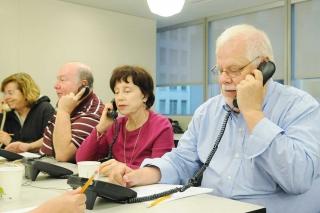 One potato, two potato, three potato, four. Guess which major political party has advocated the following policies? The comments next to each make no claim to political objectivity. One potato: Abolish the Affordable Care Act, free pharmaceutical companies to compete in price gouging and voucherize Medicare. And if you believe the value of the proposed vouchers would in any way be enough to cover your medical costs, Mae West will sell you the Brooklyn Bridge.

Two potato: Privatize Social Security. Don’t worry about the likes of a 2008 recession; this proposal would boost the investment options of experienced individual stock market and bond gamblers and, of course, give a boost to hedge fund and corporate types who have your best interest at heart.

Three potato: Switch public employee pensions to 401(k)s. There was a Depression-era cartoon of a man in a threadbare suit with pockets turned out. A squirrel, the symbol of putting away a cache of nuts for the winter, said to the formerly elegantly dressed man, “Why didn’t you put something away when times were good for when times got bad?” The man replied, “I did!” So much for investment choices beyond an individual’s control.

Four potato: Cut unions down to size through right-to-work laws. Give workers the right to work for lower wages and benefits. For more than a century, organized labor has given a voice to the voiceless and economic dignity to the workforce. Labor built this country and won’t stand for the divide-and-conquer methods of those who would trample on us.

I’m not going to reveal which political platform advocates the above. But I do know that if successful, we’d be lucky to count potatoes let alone eat them.

So the RTC is moving ahead with its 2016 presidential political campaign activities. In coordination with the American Federation of Teachers, our national affiliate, retirees are criss-crossing the country to help the Hillary Clinton campaign in primaries and caucuses.

We sent 13 retirees in teams of six and seven for two-week assignments to New Hampshire in February.

Retired UFT Vice President Richard Miller has developed an operation in Nevada in coordination with AFT, AFL-CIO, Central Labor Councils and the ARA that helped tip the scales for the Clinton win there.

In March, UFT volunteers campaigned in Colorado, Michigan and Ohio and our retirees living in North Carolina have also been busy under Danice Scott’s leadership.

Phone banks have been activated with Ken Goodfriend in Palm Beach and Broward Counties, with Donesa Jackson in Orlando and with Stewart Cohen and Lynne Wyndebaum in the Sarasota, Tampa and Hilsborough areas. We recruited Florida residents and snowbirds currently there, but also sent a dozen or more New York retirees to work in Boca Raton, Palm Beach County and Orlando. The I–4 corridor running diagonally across the state is a crucial battleground to any progressive victory there.

Here in New York, UFT President Michael Mulgrew will be on the ballot as a delegate candidate pledged to Hillary Clinton in the Staten Island/Brooklyn Congressional District. And Millie Glaberman and Joyce Hodes have been overseeing Clinton Campaign headquarters in union headquarters since our endorsement.

Please join your fellow retirees in volunteering for future efforts. Email Tom Murphy at retirees@uft.org or call 1-212-598-9576 and ask to be added to our prime volunteer list.

Remember, Republican candidates are vowing to dismantle a century of labor achievements that have given professional dignity and economic security to UFT retirees and in-service union members alike. It’s scary, not to mention bad theory and dangerous strategy.

Good theory and strategy, no matter how inspired, are only meaningful if matched with action out in the vineyards. In the closing words of JFK’s Inaugural Address: “Here on Earth, God’s work must be our own.”