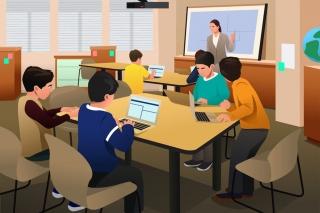 “Everybody in this country should learn how to program a computer, should learn a computer language, because it teaches you how to think,” said Steve Jobs, the co-founder of Apple. He made that remark in 1995, but schools are now catching up with his line of thought.

In September 2015, the Department of Education introduced its Computer Science for All initiative, which set the goal that every city student would receive computer science training by 2025. Coding classes and after-school and summer opportunities to learn code are everywhere.

Code is the set of instructions a computer follows to perform an action. Many of us who attended schools in the 1980s learned some BASIC (pun intended) computer languages, but the teaching of code became less popular as computers became more user-friendly. Coding is no longer needed to operate computers, but for complex design operations, coding is essential. To make an app for a smartphone, for example, you generally need to know code, and a lack of knowledge can prevent a great idea from coming to fruition.

What are some of the benefits of learning coding? It teaches complex skills such as logic, computational thinking and problem-solving that are useful in most careers. Students learn about technology from the ground up and learn to be designers, not just passive users. These skills are highly marketable in today’s economy, and coding is often a gateway to other STEM (science, technology, engineering and math) careers.

Advocates say computer code is the new literacy of the 21st century, and students who are not exposed to coding might be left behind. Like learning any language, the older you are, the more difficult acquisition becomes. In New York City, there has been a focus on coding for girls, children of color and low-income students, since many tech companies, and Silicon Valley in general, have employees who are overwhelmingly male and white or Asian. The U.S. Department of Labor projects that 1 million jobs in computing will go unfilled by 2020 due to a lack of skilled candidates.

Detractors note that technology companies — obvious beneficiaries of a workforce more skilled in coding — have been pushing coding in schools. Many coding initiatives are, in fact, funded by business leaders in technology. Focusing on an area such as coding can be limiting later in life, since technology changes so rapidly. Also, not everyone is hard-wired for STEM.

What coding opportunities exist for New York City students and teachers, and how can you learn more?

Code.org is a great place for a self-starter to begin. It houses free lessons, hands-on labs and a full computer science curriculum. It hosts the annual Hour of Code, an introduction to coding to demonstrate that anybody can learn the basics.

Girls Who Code was created to close the technology gender gap. It offers New York-based after-school and summer programs for students.

The New York Public Library’s TechConnect program provides free classes in the Bronx, Manhattan and Staten Island and also offers Project Code, a 10-week program for anyone interested in coding.

There is an abundance of other coding workshops available in the city, and private funding ensures that many classes are free.