Fourth-grade students at PS 748 in Brooklyn experiment with building a "life vest" that can keep a soup can afloat in water.

Several 4th-graders at PS 748 in Bath Beach, Brooklyn, were bent over a can of Campbell’s soup, diligently wrapping a rubber band around a straw they’d connected to the can.

“The straw is like an antenna for a distress signal,” one of them joked. Then he paused and studied their contraption. “Oh!” he exclaimed. “We could tape balloons to the straws, and that might help the can float!”

Two other boys were methodically taping a dozen straws to a Ziploc bag to create a “raft” for their soup can. One girl wrapped an entire can in foil to protect it from water.

The children were all building a “life vest” for the soup can using supplies like balloons, rubber bands, straws, Ziploc bags, foil and tape. Their goal was to keep the can afloat in a tub of water for at least 90 seconds. 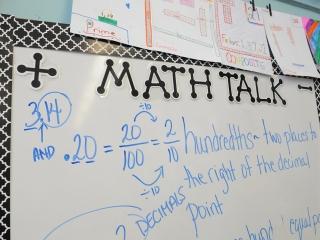 For each failed attempt, students calculate the difference between their result and the target time in terms of tractions of a whole.

Their math teacher’s goal was different: For each failed attempt, students would calculate the difference between their result and the target time in terms of fractions of a whole.

“I let them get motivated and excited first,” said their teacher, Shari Gigante, as she surveyed the proceedings. “We start with the abstract model and then build to the concrete algorithm.”

If it doesn’t sound like a typical activity for a math class, that’s because over the last few decades, there’s been a seismic shift in the way teachers approach math instruction. Rote memorization of mathematical algorithms — or so-called “drill and kill” instruction — has given way to experiential learning. 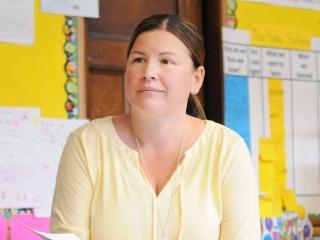 Math teacher Michelle Gemellaro listens to her 3rd-grade students debate whether all squares are rectangles.

Because this new approach has coincided with the implementation of the Common Core Learning Standards, you’ll hear it referred to in many places as “Common Core math.” It’s rarely intended as a compliment: “Dad’s Rant about Common Core Math Problem Goes Viral,” read one 2014 headline in Time magazine. In 2015, EdWeek reported, “Another Parent’s Common Core Math Slam.”

But it’s not the math that has changed, although it certainly looks different. It’s our expectations — for how children should interact with and understand math — that have evolved.

“I think parents’ discomfort and disconnect with these new methods is that they themselves don’t understand the workings behind the math,” says Gigante. “They just know the rote way they were taught.”

For example, parents are likely to have learned the standard subtraction algorithm: Begin with the right-most column of numbers, cross out numbers in the columns to the left and carry the 1 until you can subtract a smaller number from a larger one.

The algorithm works. But it doesn’t always promote the understanding that what you’re actually doing is regrouping a ten as ten ones. Visual models like ten frames and number lines are a new way of representing that concept — although they may look unfamiliar and strange at first.

“The style used to be to teach procedures, and eventually kids might figure out on their own why they worked,” says Siobhan Lorina, a math Academic Intervention Services provider at PS 748. “Now it’s the other way around. The algorithm is the end result — there’s no reason to learn that first.”

Upstairs in Michelle Gemellaro’s 3rd-grade class, for instance, students were kicking off their first day of geometry by holding a debate in “math court.” The issue on the table: Are all squares rectangles?

“You see a lot of misconceptions as they’re speaking,” Gemellaro noted as she listened to one student explain that squares have equal sides, but rectangles have “sides that are much bigger.”

“It’s important to have this discourse in math class because I want them to think more deeply about the concept,” she said.

Another way schools are promoting opportunities to delve more deeply into the math curriculum is by departmentalizing math instruction. In January 2016, as part of its “Algebra for All” initiative, the DOE announced that it would begin departmentalizing math for 5th-graders over the next five years to allow teachers to specialize in the subject.

At PS 748, which has departmentalized subjects for 3rd through 5th grade since 2012, teachers say they are able to become experts in the subject area they teach.

“We love it because we really get to hone in on the standards and know them in-depth,” says Chapter Leader Teresa Fabbella.

And a strong grasp of the standards underlying mathematical concepts is ultimately the true goal of Common Core math.

“It’s all about building an understanding as opposed to memorization,” says Lorina, the math Academic Intervention Services provider. “We want them to understand how numbers work and what they’re being asked to do — not just how to do it.”