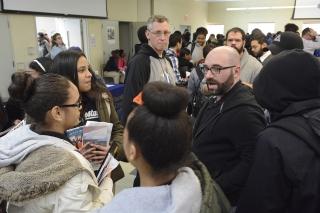 Eighteen hundred public high school students came to a Bronx College Fair the UFT helped organize on March 23 to meet with representatives of 85 colleges and universities, as well as representatives of organizations that provide support for completing college and financial aid applications. “The point of this whole thing is to provide students and parents with a college and career fair that belongs to them,” said James Rodriguez, a UFT retiree from College Goal NY who worked with UFT Bronx Parent and Community Liaison Nick Cruz to plan the fair at the union’s Bronx borough office. There were financial literacy workshops courtesy of the Hispanic Federation and, thanks to a partnership with the New York State Department of Motor Vehicles, 150 students received their nondriver ID cards. “That was the grand slam of the event,” said Cruz, “because parents had really struggled to get their kids IDs.” Jessica Torres, a college counselor at the HS of Computers and Technology, said 20 of her students received their IDs and felt it was a “step into adulthood.” The other 20 students who came with Torres met with college representatives. “A lot of the students are immigrants and they’re not used to the college process here,” she explained, “so it was great for them to speak to representatives about the application process, how to be a good candidate, resources available at the schools, and all the things that make a college amazing.”