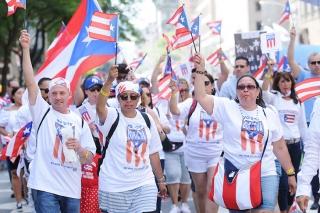 More than 200 UFT members, family members and friends marched up Fifth Avenue on June 9 in the Puerto Rican Day Parade. In a first, Schools Chancellor Richard Carranza rode the UFT float with UFT Vice President Evelyn DeJesus. “I’m Puerto Rican, so culturally it’s important for me to be here,” said Sue Ellen Baez, a teacher at PS 46 in Queens, who viewed the parade from the sidelines with her cousin. Thomas Rosa, a chapter leader and dean at PS 751 in Manhattan, took his son Jude, age 5, to the parade for the first time. “He’s very musically inclined,” Rosa said. “He listens to more salsa than I do.” Jude, who attends PS 63, wore a hat that belonged to his great-grandfather, also a musician. Rosa said he also marched out of gratitude for the AFT response to Hurricane Maria in 2017. The UFT’s national union helped reopen schools on the island and provided water purifiers. “It’s a bit emotional for me,” he said.