The UFT’s work is far from finished

Fifty years have passed since the UFT was first founded and secured collective-bargaining rights for New York City’s public school educators. Speaking with a single voice for members, parents and children, the UFT quickly became a true champion of quality public education, and has since grown by leaps and bounds.

Today, more than 200,000 people proudly call the UFT their union at a moment when unions and teachers have come under attack.

As UFTers spent the last year reflecting on and celebrating their union’s storied history, there were many lessons to be learned, perhaps none greater than the value of unity.

Time after time, the UFT has weathered more than its share of struggles thanks to the hard work and commitment of its members. The obstacles the union faced were never insurmountable when it stood on the right side on the issues and worked as a team to bring about positive change for city schools and our communities.

That lesson remains as true today as it did 50 years ago.

In the classroom, members are doing what they’ve always done — the hard work of developing and advocating for important programs, services and curriculum that will help their students to succeed and grow. UFT educators devote long hours to their roles and they do it because they truly want to make a difference in children’s lives.

Year round, members support valuable causes in their communities, such as the thousands who participate each October in the Making Strides Against Breast Cancer walk at locations in the five boroughs and suburbs. They raise and donate money for disaster relief as they did this past spring when thousands of members raised $100,000 to help fund relief in earthquake-ravaged Haiti. In just a few weeks, some of the more than 16,000 children living in New York City’s homeless shelters will enjoy a holiday party and gifts because of the generosity of UFT members.

And just as UFT members stand united against the staggering increase in teacher and union bashing, they also stand strongly behind the important issues of our generation: the need for job growth, a strong economy and proper school supports. From the “Save our City,” “One Nation Working Together” and other such rallies to the relentless efforts on behalf of union-endorsed candidates leading up to this past Election Day, UFTers have worked en masse to move the union’s causes forward in the political and professional arenas.

“Everyone wants our children to receive a world-class education, and we can get there if teachers and their school communities are properly supported,” said UFT Vice President Karen Alford. “That support and collaboration are vitally important.”

As UFT President Michael Mulgrew often says, UFT members will always stand apart for their tireless commitment to students, their parents and fellow New Yorkers. The challenges that educators face may be daunting, but UFTers have always risen to the occasion and, more often than not, prevailed.

The UFT borough offices are constantly busy, as members rush to take advantage of the many professional development opportunities that are offered, or to participate in professional committee activities. Career ladders have taken paraprofessionals all the way to the front of the classroom and beyond, and now family child care providers are making huge leaps forward as well. New services such as the Member Assistance Program have been added to lend a hand when one is needed, and enhancements to UFT Welfare Fund benefits are regularly announced. 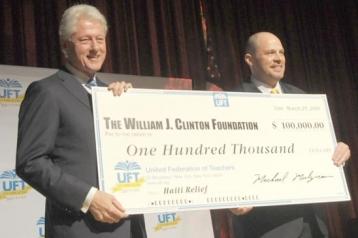 Groundbreaking programs such as Dial-A-Teacher, which takes thousands of phone calls each week from students and parents needing homework help, and the Albert Shanker College Scholarship Fund, which gives away more than $1 million to deserving students each year, continue to flourish.

“The union is and always has been a vibrant and dynamic organization that never hesitates to protect all that we’ve gained for our future retirees or take on important causes for our members and their schools,” UFT Treasurer Mel Aaronson said. “The fact that so many of our retirees are still involved speaks volumes about the importance of the work that we do.”

“Our union’s role is so much more than just improving our schools,” said UFT Director of Parent and Community Outreach Anthony Harmon. “It’s also about improving the communities where we live and work.”

Indeed, while so much has changed since the UFT was founded, the dedication of the union and its members has not. And that means that the UFT is well-positioned to face the challenges ahead.