Back from the brink: How the UFT saved New York from bankruptcy

Sound familiar? 2010? No, the year was 1975 and the city was teetering on the edge of bankruptcy.

But real disaster was averted when the state, city and business community joined forces with the city’s unions to forge a joint solution. And therein lies a lesson that today’s New York leaders might do well to recall. 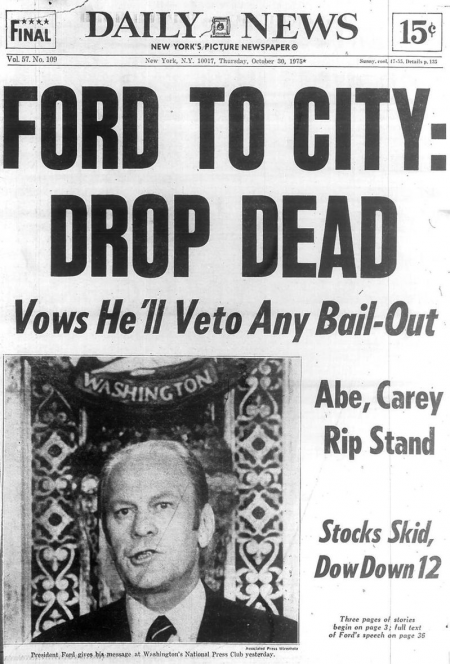 When teachers returned to school that September of 1975, school staff had already been thinned by the first wave of what would soon become 14,000 layoffs. The schools were in chaos. Classes of 50 and more were reported. The day before, UFT members had marched across the Brooklyn Bridge to protest the budget cuts. That afternoon at an emergency Delegate Assembly and pending an evening vote by the membership, they decided to strike, despite the probable loss of two days’ pay for every day on strike.

In a way, the strike solved the immediate problem. After five days, the city had saved enough money on the withheld teacher salaries and fines that it could afford to hire back some of the laid-off teachers. Class sizes were further reduced by shortening two school days each week by 45 minutes, eliminating the need for coverage during prep periods.

But a negotiated raise was rejected by the Emergency Financial Control Board, a state agency that had just been created to reassure the banks and city bondholders. Thus began a decline in relative salaries for New York City teachers from the highest in the nation before the fiscal crisis to 25 percent behind the surrounding area until the next century.

The settlement, however, did not address the impending financial disaster. With the city unable to market its bonds and thus pay its debts, the EFCB was counting on the city’s unions to invest their pension funds in municipal bonds. If the city went bankrupt, few had more to lose than city workers, the reasoning went. Even those who kept their jobs would have to take furloughs and pay cuts. The Teachers’ Retirement System was expected to pony up $150 million.

UFT President Al Shanker knew this was an opportunity to make a huge difference in the city’s future. But still he hesitated. The union had already bought city bonds, and Shanker was reluctant to put members’ pensions further at risk. He also wanted to protest what he considered a dangerous precedent in the EFCB’s power to abrogate a collectively bargained agreement. For a while there, New York’s economic future, and some say the entire nation’s, depended on the UFT.

On the day the city’s cash ran out, Shanker, wanting to help but still exploring the options, had a tension-filled meeting with city and state political leaders and the architects of the rescue plan. (One of them, Richard Ravitch, is in 2010 still devising bailouts for financially stressed governments, most recently the State of New York.) As the banks’ closing hour approached, Shanker, convinced that default would wreak irreparable harm on his members and their students, committed the UFT’s retirement system trustees to the bond purchase. By stepping up that day, the union kept New York running.

In years to come, the city bonds would turn out to be a good investment, but the effects of the fiscal crisis on New York City education would linger for decades. The city’s pre-1975 advantage in per-pupil spending and teacher salaries disappeared. Pension benefits were reduced. School maintenance and construction ceased, causing overcrowding and a crumbling, obsolete infrastructure. Noncompetitive salaries resulted in teacher shortages and less-qualified instructors.

But today, historians and journalists remember wistfully the time the city’s leaders in business, labor and government were able to overcome their deep-seated differences in order to save their city.