It almost sounds like a lead-in for a stand-up comedy routine:

What’s the difference between a union and a professional association?

But it’s no joke. The answer affects your livelihood, your day-to-day working life and your future career. 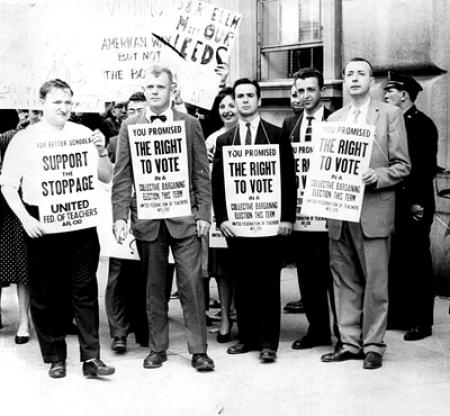 Just like a union, a professional organization represents the interests of its members. Banding together, members may be able to provide products and services to those who join — perhaps magazine subscriptions or professional development or insurance at group rates.

In that sense, teachers in the United States have organized since the earliest years of the 20th century.

The United Federation of Teachers was formed in March 1960. But it took almost two years for the union to gain that power to bargain collectively. On Dec. 16, 1961, the 50,000 public school teachers of New York City, after a tumultuous period of debate and dissension as well as courageous demonstrations of determination, finally were able to freely elect a collective bargaining agent to represent them in negotiating their first contract with the Board of Education. By an overwhelming majority, they chose the United Federation of Teachers over two rival groups.

The decisions and events that led to this historic occasion — and those that resulted from it — will be the subject of a continuing series of articles in the coming year to commemorate the UFT’s 50th anniversary.

What will emerge, through all the issues and challenges that faced us, whether it’s 1960 or 2010, whether it’s for 50,000 members or for the 200,000-plus educators and health and child care workers that we represent today, is one unifying theme: a fight for respect and dignity as a union of professionals.

Today, of course, we are in the midst of exercising the very right made official on that December day 48 years ago. Collective bargaining today is a far cry from the way educators sought changes in their pay and in the conditions of teaching and learning then — a process that early unionists termed “collective begging.”

In addition to the right to bargain collectively, a right that educators and other public employees are still denied in many states — New York State law today ensures that our current contract remains in effect until a new one is ratified. So we are negotiating today in relative security, knowing that the employer cannot unilaterally yank any of the rights and protections we have gained in the past.

But the right to bargain collectively is offset by the law’s denial to public sector unions of labor’s major lever to achieve its bargaining goals — the strike.

As we will see in our history series, the UFT has flouted this law several times when no alternative seemed available. The penalties for such illegal strikes are severe, both for individuals and for the union as a whole. In addition to monetary fines, the members lose the protection of the status-quo provision described above. And in the early years, the union’s founders faced even more draconian punishment, including dismissal.

Still, courageous leaders and members throughout the city have been willing to take that risk when the cause was great enough and the employer recalcitrant enough.

The law does provide for more peaceful ways to settle bargaining differences. Recently the union’s highest policy-making body, the Delegate Assembly, authorized the union’s leaders and negotiating committee to exercise one of those provisions if the ongoing talks continue to be deadlocked. An official declaration of impasse would trigger a mediation process and if that fails to produce an agreement, a fact-finding hearing. There, an impartial panel of arbitrators hears the two sides present their cases and renders a nonbinding recommendation for a settlement which becomes the framework for further talks.

In any event, no terms can be imposed by any government body. The final agreement must be voluntary by both the city and the union, and ratified by the UFT membership. 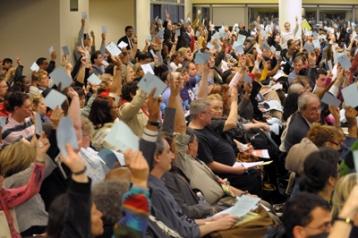 Many issues beyond salaries and benefits have been raised at the talks. As anybody who reads their public statements knows, management is challenging many of the basic precepts of our profession. In addition, state and city fiscal problems cloud the prospects. A lot is at stake.

Fifty years ago, the triumph of the fledgling UFT spurred an explosion of teacher unionism across the country. It led to a period of national recognition of the importance of education for our country’s future. Professional standards for educators were raised along with compensation. Increased funding and important reforms followed. It is hard to imagine what our schools would be like today if not for the union movement.

What New York’s educators do in the next few years may be equally as momentous in the history of American public education. No doubt the UFT will have a role in those decisions.

But it is the strength and solidarity of the membership that will make the difference. We can play a big role in determining whether public education continues to be the engine for the success of the vast majority of Americans, especially those who are neediest. As we begin our 50th year, we must be mindful of that ever-present responsibility.