Eadie Shanker, a UFT founder and the wife of former UFT President Albert Shanker, died of kidney disease on Sept. 19 at age 87. 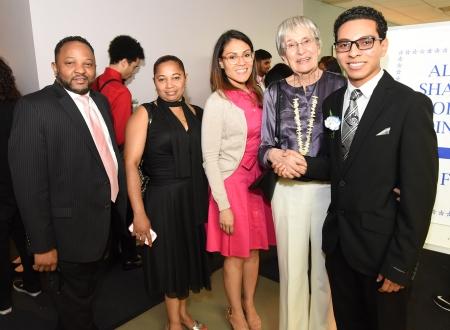 Eadie Shanker (second from right), with an honoree and his family, is joined by former scholarship fund director Anthony Harmon (left) at the Albert Shanker College Scholarship ceremony in 2016. 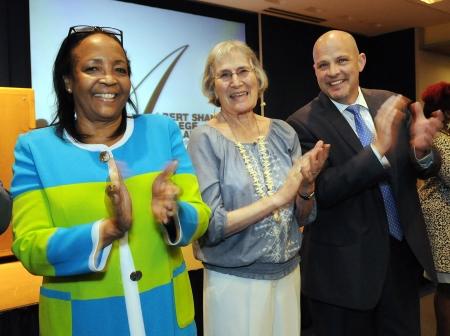 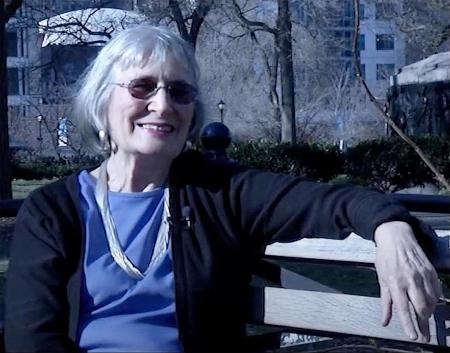 Besides helping to organize the UFT and remaining involved in the union, Eadie Shanker was also a lifelong city and social justice activist.

From her earliest days as a young teacher at JHS 126 in Astoria, Queens, in the 1950s, Eadie Shanker devoted her life to the UFT. Before there was a UFT, she was a member of the Teachers Guild, working to organize and unite multiple blocs of educators into a single, more powerful unit. She organized UFT chapters throughout the city and was a picket-line captain during the union's first strike in 1960. That one-day walkout, which the strikers knew threatened their livelihoods, won collective bargaining rights for New York City teachers, a first in the nation.

"Eadie Shanker was not only a courageous woman who put her career at stake to found this union, but she remained a lifelong supporter and advocate for public education and social justice," said UFT President Michael Mulgrew.

During those first tumultuous years in the life of the union, Eadie Gerber met Al Shanker, then a colleague and a math teacher. They married, and their Harlem apartment became headquarters for the endless meetings to build and strengthen the UFT until it could afford to rent space and hire staff.

Edith Gerber Shanker, known to everyone as Eadie, grew up with her two siblings in an orphanage and in foster homes in Pennsylvania, where "they were made to work hard and only allowed to eat the leftovers," according to the Shankers' three children. When she was old enough to leave foster care, she joined her older sister in New York City and worked as a waitress while earning a degree in English at City College, where the tuition was free at the time.

She left teaching to raise her children but returned to education after they were grown. She helped create a basic literacy program and a high school equivalency diploma program for adult union workers at city agencies as well as the City University of New York's Collaborative Program for High School Dropout Prevention. She also directed CUNY's high school/college student mentoring program.

And throughout her life, she remained committed to the UFT.

"Over the years, my union sister and I have attended conventions, conferences, demonstrations, parades, rallies and protests," founder George Altomare said. "She was devoutly committed to progressive issues her whole life."

AFT President Randi Weingarten, a former UFT president, also paid tribute to her. "In the Jewish tradition, a person who dies on Rosh Hashanah is a person of great righteousness," Weingarten said. "Eadie was all about shaping something new. She was righteous and believed deeply."

As a city activist, Eadie Shanker helped in the fight to protect public space in Union Square Park from commercial development and to raise funds for the People's Symphony Concerts that provided low-cost chamber music performances for students, workers and educators.

Her commitment to the union was particularly evident in her dedication to the Albert Shanker Scholarships that annually provide a million dollars in awards to outstanding high school students from low-income families and to graduate students.

Anthony Harmon, then the director of the scholarship fund program, cited the hours and hours she spent reading and rereading the students' essays to make sure they reflected the required spirit of academic achievement and financial need. "And always," Harmon said, "she wished we could award more scholarships because it was so difficult to limit the number of awards."

Retiree Chaitrim Aklu captured the unpretentiousness that people admired in Eadie Shanker in his story about meeting her at the 2010 AFT convention in Seattle, where he was a delegate. Aklu was sitting alone at breakfast when Eadie Shanker asked if she could join him, introducing herself and insisting he call her Eadie. "I knew of her," he said, "but her simplicity at that meeting is what I admired about her."

Shanker is survived by three children, Adam, Michael and Jennie, and four grandchildren.