A taste of the future in Queens: District 75 culinary arts program 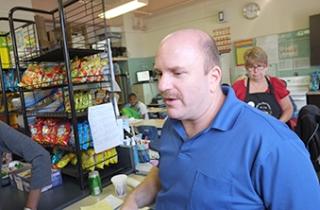 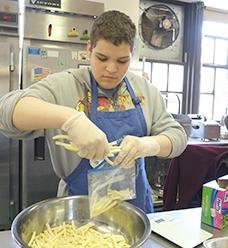 Nicole rang up a snack purchase one morning, her fingers flying nimbly over the state-of-the-art computer register. Gabriel scrubbed utensils in the sink after his breakfast shift. Jisung donned an apron, waiting for lunch orders to arrive — in a few minutes, he’ll be flipping beef or salmon burgers, toasting buns and lowering a basket of cut potatoes into a fryer.

It could be a scene from any one of countless neighborhood delis or lunch counters across the city. But the employees here are 12 students in the culinary arts program located at PS 177 in Fresh Meadows, Queens, a K-12 school in District 75 for special-needs students, also known as the Robin Sue Ward School for Exceptional Children.

The culinary arts students, who range in age from 15 to 17, are learning to cope with a number of challenges, including speech impairment, autism and emotional problems. Under the guidance of culinary arts teacher Robert Schoenfeld, the program helps them make the transition to the work and independent living that lies ahead by training them to work in a busy and sometimes noisy environment where they’re expected to multitask, including interacting with customers.

Teachers recommend students for the program, which can last one year or two depending on how quickly the student masters the tasks. Students are also expected to keep up their academic work, and they break at regular intervals for classes during the day.

The students, who receive a small stipend or hourly wage, rotate each month among 10 different workstations, including cash register, coffee, breakfast prep, kitchen and sanitation. And they do it all: stocking refrigerators with soda and juice, making a fresh pot of coffee, chopping up tuna and chicken salad, and cooking on the grill. Every Monday, Schoenfeld takes half the class to a BJ’s Wholesale Club store, where they stock up on supplies.

Only school staffers are allowed to order lunch, but students in the rest of the school can stop by at certain times to purchase snacks. Shernice Blackman, the school guidance counselor and UFT chapter leader, said the school utilizes the culinary arts students whenever possible to cater special events such as the annual parent breakfast and holiday parties.

After they’ve mastered most of the workstations, the students go to work sites in the community — everywhere from Applebee’s to CVS. Most graduate from the non-graded school at age 21. With the help of the culinary program, they have the work habits and social skills they’ll need to succeed.

Schoenfeld, who has led the program since 1999, took what had been a simple operation and added freezers, a grill, a coffee maker, shelving, cabinets and more. Restaurants with unwanted equipment gave him a good price, enabling him to ramp up the program.

“It’s been an evolution over a decade,” he said.

Schoenfeld fell in love with the program when he worked as a paraprofessional assisting the previous culinary arts teacher. He also teaches math and English in a classroom adjacent to the culinary operation.

He’s seen firsthand the program’s effect on participants. “A lot of students are not as social, but here they’re forced to communicate with students and staff as customers,” he said. “They become much more engaged. Students with autism or Asperger’s syndrome tend to be secluded inside themselves. Here they come out of their shells.”

One of his first students now does food prep at Applebee’s, and Jisung, 16, said he hopes to work at a Korean bakery or a Starbucks one day.

Joyce Moran, one of three paraprofessionals who help supervise the culinary arts students, has worked in the school for 18 years, but this is only her second year in the culinary arts program. “I’ve wanted to come here a long time,” she said as she waited to assist Jisung in his cooking duties. “I love to cook, and I love to work with older kids.”

The two other paraprofessionals, Leslie Feinman and Eileen Sharkey, have worked with Schoenfeld for several years. “All three keep the heart of the program going,” he said.

Nicole, 14, said she was nervous when she first moved to the cash register after a month working the grill. “Everyone was in line,” she said. But now she quickly works the handheld scanner to capture a price code on a snack, rings up purchases and makes change.

Schoenfeld hopes to expand the program to a full-service luncheonette. He said that would help the school to better strike the balance between the academic and the vocational skills the students need.

The program has been a draw for students. “It boosts self-esteem because it’s one of the more desirable places to work,” Schoenfeld said. “If kids can learn here, they can learn anywhere.”