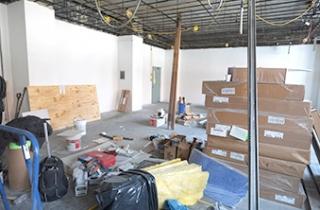 Even as Mayor Bill de Blasio takes welcome steps to require greater scrutiny of co-location proposals, schools dealing with co-locations foisted on them during the Bloomberg years continue to pay a price. A case in point is Susan S. McKinney Secondary School of the Arts.

Since September 2012, the school in Fort Greene, Brooklyn, has had to share space with a Success Academy charter school for grades K-2, which took over 75 percent of the third floor and is preparing to take over more as it adds grades 3 and 4. McKinney has had to reconfigure its remaining space.

McKinney, which serves 550 students in grades 6 through 12, sacrificed its offices for parent coordinators in order to build a new dance studio to replace the one that is being displaced by the charter school. The fine arts studio, another casualty of the co-location, will find a new home on the first floor after three rooms are combined into one.

Chapter Leader Jerrick Rutherford said what hurts the most are the student programs that will simply vanish. A string music program, funded by a grant from the Noel Pointer Foundation, was discontinued because there was no longer room for it. A computer lab on the first floor was dismantled to make room for the black box theater, where students perform and re-enact Supreme Court decisions for history classes.

Surveying the empty lab and the wires dangling from the ceiling — the last remnants of the computer stations — Rutherford said, “Our computer lab was used for composing and music theory. It had been a resource for the entire school.”

Guidance counselor Donna Sealey-Robinson said she now has to share an office, making it difficult to have private, confidential conversations with students. Rutherford said the school still hasn’t figured out where to locate the copy room, storage drums and rehearsal space. Security is another concern: Rutherford said last summer that he had to call police after the charter school left a door open, a violation of school procedures.

Zakiyah Harris, a dance teacher, won’t be able to move into the new dance studio in the basement until the fall. While her classes can still be held in the third floor studio until then, students no longer have access to third-floor bathrooms — which are now the property of Success Academy. “They have to go to another floor to use the bathroom,” Harris said. The new studio appears to be the same size, but some ballet barres are missing because of how the room was reconfigured.

McKinney was in the spotlight recently after a series in The New York Times followed 11-year-old Dasani Coates, a homeless McKinney student who found support from Principal Paula Holmes, her dance teacher Harris, and her humanities teacher Faith Hester, among others at the school. Rutherford said 10 McKinney students live in the nearby Auburn Family Residence, where Dasani and her family once lived.

McKinney is just one of the hundreds of schools that saw their space usurped by charter schools during the Bloomberg era. De Blasio has proposed charging rent for charters that can afford to pay and placed a temporary moratorium on co-locations, which he lifted on Feb. 24 when he announced a new process for engaging the school community in these decisions.

Even with all that it’s already taken, the Success Academy continues to make ever more demands on hard-pressed McKinney. Success Academy administrators are now complaining about a huge steel storage locker, which occupies a portion of the walkway between the school and the playground. They say the locker is a hindrance to charter school students who go through the side doors, Rutherford said. The locker, Rutherford pointed out, contains furniture, books and other materials that McKinney no longer has space to store.

“They want us to move the storage locker because their students have to walk around it,” Rutherford said, shaking his head. “What’s next?”