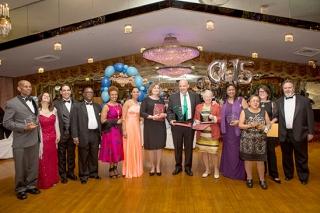 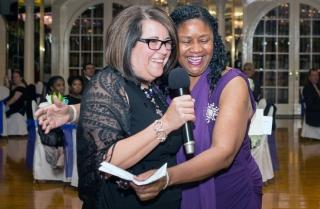 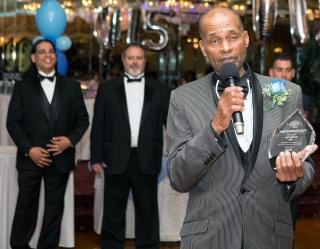 More than 200 UFT members, their family members and friends gathered at the Astoria Manor in Queens on May 14 for the 10th annual Friends of District 75 awards ceremony. The event honors those who have made outstanding contributions to the district, which serves special needs students. “I consider District 75 to be the best district — not because of its magnitude or uniqueness or the types of students we service, but because every day holds potential for us to experience a small celebration of student success,” said UFT District 75 Representative Analia Gerard. “When that happens, the feeling is just amazing.” The night’s honorees included Cecilia Cortez, the UFT Hearing Education Services chapter leader; Maureen McCaffrey, the chapter leader at PS 352 at P 92 in the Bronx; Hans Marryshow, a special education teacher and chapter leader at PS 256 at Beach Channel HS in Queens; and Magdalena Cruz, a paraprofessional at PS 226 in Manhattan. UFT President Michael Mulgrew and Schools Chancellor Carmen Fariña received Leadership Awards. Tribute was paid to Philip Sylvester, who taught at PS 369 at P 67 in Brooklyn and served as a UFT interim acting District 75 representative, who died recently. There was also a moment of silence for Walter O’Leary, a former UFT District 75 representative, and Lana Knight, a former chapter leader at PS 373 on Staten Island, who also recently passed. “It’s a special person who is drawn to District 75,” said Marryshow. “You cannot be a teacher who expects immediate gratification. It’s a deep commitment. You have to be a sponge, willing to absorb everything around you to benefit the children.” Despite the challenges, he added, “If you want to have a smile consistently, come to this district. We rely on each other to get through.”