Lately the media have been overrun by charges that the teachers union is the 800-pound gorilla in the room whenever education policy is discussed in the halls of power — and it’s not meant as a compliment!

At a time when our schools are facing their worst fiscal crisis in at least 35 years, and the UFT is pulling out all the stops in an effort to preserve school funding in Albany — as it has so often before — this anti-union campaign, backed by some wealthy philanthropists and hedge fund managers (no slackers themselves when it comes to lobbying power), is a dangerous diversion from the real threat to public education — defunding.

But using our clout to protect children is nothing the UFT apologizes for. Since its founding 50 years ago, the union has used political action to help ensure appropriate services for children, good conditions for teaching and learning, and a living wage and respect for members. One of its earliest slogans, “Teachers want what children need,” is still relevant today.

In the beginning, many teachers shied away from participation in “politics” as “unprofessional.” But between fights with successive mayors over contracts, with Albany over school aid and with the Board of Education over a professional voice for teachers, that changed.

Unlike most interest groups, though, it’s people power more than dollar power that has fueled the union’s political activity. With 200,000 educated, activist, voting footsoldiers whose opinions, the polls say, are respected in their communities, the union can sway elections. From its earliest days, the UFT’s voluntarily funded political arm, the Committee on Political Education, contributed to the campaigns of labor- and education-friendly candidates and supported such member actions as phone-banking, leafletting and door-knocking on their behalf. Just as significant have been the union’s issue-oriented lobbying efforts, including demonstrations, letter-writing, advertising and constituent visits to lawmakers. The union’s annual Albany Lobby Day typically fills dozens of buses with members and parents to travel upstate to talk to their representatives. Legislators say they listen to their UFT constituents because of their evident commitment and intimate knowledge of their neighborhood schools.

And, during the workday when in-service members are in school, much of the people power comes from retirees who give their time to fight, not only for their own economic security and that of in-service members, but also for the well-being of the children to whom they devoted their working lives.

Coming to the rescue to save the schools is nothing new to them. On Sept. 4, 1975, 20,000 UFTers protested huge budget cuts and layoffs in a historic march across the Brooklyn Bridge from the Board of Ed (then at 110 Livingston St.) to City Hall. It was to no avail. Four days later, frustrated and angry at the chaos on the opening day of school, they voted to strike.

As it turned out, there simply was no money. But a lesson was learned. To prevent future recurrences of disproportionate school cuts, the UFT pushed for ground-breaking legislation that assured education a fair share of the city budget.

Disappointingly, Gov. Hugh Carey vetoed the Stavisky-Goodman law (so called after its legislative sponsors). But relentless pressure from the UFT finally produced the state’s first legislative override in 104 years. Since then, whenever belts have to be tightened, children have been spared the biggest squeeze.

Still, budget cuts and state aid that shortchanged high-need districts continued to threaten year after year, and each time the UFT, increasingly in alliance with parent and community groups, rallied to the defense of schoolchildren. At the same time, the union worked for a long-term solution, backing a 13-year lawsuit against the state and then pressuring the Legislature to fund the settlement. Now, that funding has been frozen and the UFT is lobbying to restore it, along with all cuts to the city schools.

Not to be discounted, of course, is the support the union gives to its endorsed candidates. A committee of members in each district interviews candidates who are seeking the union imprimatur. Based on the candidates’ records and views on public education, labor and human rights, the committee makes recommendations for submission to the Delegate Assembly, which must approve all endorsements. 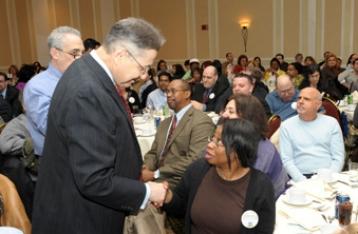 The UFT, along with its state and national affiliates, has often made the difference in a tight vote, including the upset primary victory of Mario Cuomo in his first race for governor in 1982, and the hard-fought 1989 election of Mayor David Dinkins.

In one unusual example, however, the UFT chose to give up its influence. After the Legislature decentralized the school system in 1969, the UFT began to endorse candidate slates in the community school board elections. Despite consistent victories, it ceased the practice in the early 1990s. The reason? Rampant corruption and mismanagement on the boards impaired their ability to improve the schools.

On the labor front, the union continues to work to protect its members’ collective-bargaining rights, rights denied to public employees in many states. In the UFT’s early years, striking members faced immediate dismissal. With the 1967 passage of the Taylor Law, that penalty became loss of two days’ pay for every day on strike. Since then the union has won significant improvements, including the 1978 elimination of the requirement that strikers be put on one year’s probation and the addition of the Triborough Amendment in 1982. The amendment continues the terms of an expired contract until a successor agreement is reached, except if workers strike. It’s why UFT members today continue to receive all their rights and benefits under a contract that formally ended in October 2009. However the elimination of the two-for-one fine continues to be on the UFT’s legislative agenda.

Is the UFT an 800-pound gorilla? Sometimes it is, and for our city’s school kids, that’s not a bad thing.