The UFT’s Spring Education Conference began with a panel discussion called “Speak Up” at which a half-dozen teachers spoke about what New York City public school educators and students need to thrive.

“We are on the front line doing the work; we need you to hear our voices,” said Cherly St. Louis, a Bronx special-ed teacher.

That sentiment was seconded by Shavon Frazier, a pre-K and kindergarten educator at the Newport School in Brooklyn. “You want to get the information straight from the classroom, straight from the ones working with the families,” she told the audience filling the hotel’s Grand Ballroom.

UFT President Michael Mulgrew, who co-hosted the panel with City Council Education Committee Chair Rita Joseph, a former Brooklyn teacher, said that top education officials from New York to Washington, D.C. weren’t deliberately seeking to “make teachers’ lives miserable. But we know our challenge is to get them to all step back and take a look” at what needs to change.

Told to use a reading curriculum that she felt was developmentally inappropriate for kindergartners, Frazier said it had been “heartbreaking” to hear them say to her, “I don’t want to read.” Their love of reading blossomed, she said, when she started to use a different curriculum this school year. “The growth that my children experienced has been astronomical,” she said.

Genevieve Quinones, who teaches at the Garden of Learning and Discovery Pre-K Center in the Bronx, expressed frustration with DOE policies she said left playtime for her young students “really disappearing from the classroom.”

What policymakers didn’t seem to grasp, she said, was that “play is the way children work. This is how the brain develops.”

Too often, said Jenna Lempesis, who teaches at PS 111 in Manhattan, educators were told by supervisors “they had to scrimp, save, cut corners,” even if the budget-cutting hindered the learning process.

Jason Petsch, a math teacher at Jonas Bronck Academy in the Bronx, said that while there were many issues outside educators’ control, he believed the time was right to have their input taken seriously by the DOE.

“People are listening,” he said. “We’ve experienced a crisis that is unprecedented in our modern history, and it’s time to challenge the status quo and really make some improvements.”

The panel discussion grew out of the union’s April 14 forum titled “Listen Up: the reality is…” at which these and other educators told top officials, including Schools Chancellor David C. Banks, what needed to change.

‘Meeting students’ needs’ is what it’s all about 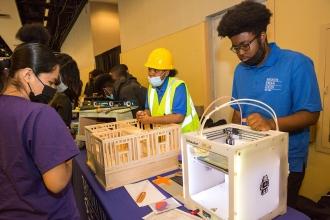 The booths featuring the skills of the city’s career and technical education (CTE) high schools and programs were the highlight of the Spring Education Conference’s exhibit hall.