Richard Mantell is the UFT vice president for middle schools. He received his bachelor’s degree in business management and finance from Brooklyn College, his master’s degree in education with a concentration in guidance counseling from Long Island University and a second master’s in school administration from Baruch College.

Rich was elected vice president by the UFT Executive Board in October 2013. In that role, Rich works to keep UFT members engaged in their profession and their union and to make sure they understand their rights as teachers and public employees.

Rich began his work at the UFT in 2004 as a part-time staffer in the union’s grievance department. From 2006 to 2013, he served with distinction as the district representative for Brooklyn’s District 18. As a district representative, Rich proved masterful at mobilizing union members for political action. He also gave extraordinary support to chapter leaders. Rich’s advocacy for District 18 members was rooted in his deep and broad knowledge of labor issues and his skill at resolving classroom problems and grievances that could not be handled at the school level.

Rich grew up, attended school and has spent his entire career working in Brooklyn’s Canarsie and East Flatbush neighborhoods. With a father who was a 38-year educator, Rich was imbued from an early age with a deep respect for the teaching profession. After one year of teaching 1st grade at PS 276, he moved to IS 68, where he worked from 1989 to the present. He began at IS 68 as a math teacher, but he is best known as dean, a post he held from 2000 to 2013. During his 29 years at IS 68, Rich sought to make a positive difference in young people’s lives, including by helping troubled students make better choices.

Rich was elected to the NYSUT Board of Directors in 2014. Over the years, he has additionally served as a delegate to the AFT and to NYSUT; a member of the NYSUT Committee of 100; and a member of the UFT negotiating committee. The union has honored his work on behalf of members with the Albert Lee Smallheiser Award, the Backer/Scheintaub Award and the Vote COPE Award, which is given to chapter leaders who excel in raising funds for political action. 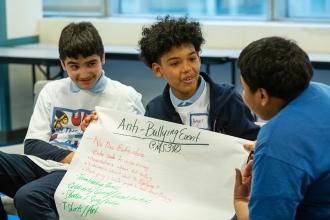 After holding my annual Middle School Anti-Bullying Conference in October, I learned my 28-year-old daughter had been bullied when she was in middle school. While I was shocked, I was not surprised.