Michael Mulgrew is the fifth president of the United Federation of Teachers, which represents nearly 200,000 New York City public school educators and school-related professionals, as well as child care providers, nurses, adult education instructors, retired members and other titles and organizations. Re-elected to his fifth full term in spring 2022, Mulgrew has served as president since July 2009.

Mulgrew met the COVID-19 pandemic head-on, leading the union and its members through the unprecedented and significant health, safety and professional challenges. He fought for stringent health and safety protocols, even creating the union’s own vaccine program, which helped thousands. With members’ livelihoods at stake, through collective bargaining and successful arbitration, he fought layoffs, negotiated payments for operational issues and secured paraprofessional workday equity.

Following the union’s decades-long state lobbying effort, Mulgrew won the automatic inclusion of full-time paraprofessionals into the Teachers’ Retirement System, cementing a secure retirement for these hard-working members. He forged a partnership with the UFT’s state affiliate, New York State United Teachers, and our TRS trustees, and successfully garnered two modifications for Tier 6 members that reduce from 10 years to five years the service time they must accrue before their pensions vest.

With further astute lobbying, Mulgrew convincingly made the case in Albany for class-size reductions in New York City. Heeding his call to action, the state Legislature overwhelmingly passed legislation that—now signed by the governor—codified class-size caps in state education law.

In the summer of 2022, he waged a major campaign against the mayor’s senseless public school budget cuts. A champion for smaller class sizes and for interventions to support students’ academic and mental health, he will fight for every member’s position and for every dollar.

Leading a member-driven campaign, Mulgrew secured Paid Parental Leave for UFT-represented employees in a labor agreement that was the first of its kind in New York City. Now, new parents of any gender may be eligible to take up to six continuous weeks of paid parental leave following the birth, adoption or foster care placement of a child under the age of 6.

Under his leadership, the union has won contracts that raised educator pay and benefits, extended due process rights to paraprofessionals and expanded the authority of school-based UFT consultation committees.

Mulgrew taught for 12 years at William E. Grady HS in Brooklyn, where he also served as chapter leader. A Staten Island native, he has degrees in English literature and special education from CUNY’s College of Staten Island. 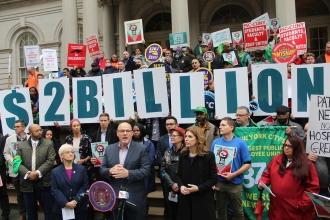 At a health care crossroads

Make no mistake, the escalating cost of health care is a national issue that requires federal intervention. But in the meantime, we must figure out a way to stabilize the cost of our own health benefits so we can avoid premiums for at least the next five years.

On the Record with Michael Mulgrew

Prodding the DOE to enact the small class-size law

The latest episode of the UFT podcast “On the Record with Michael Mulgrew” focuses on the city Department of Education’s foot-dragging on the new state law requiring New York City to lower class sizes in its public schools. Mulgrew and education activist Leonie Haimson discuss how educators, parents and community groups need to push the DOE to implement the new law. The clock is ticking for the DOE to plan for September 2023, when the first 20% of New York City public school classrooms must meet the new class-size caps.