Karen Alford is the UFT vice president for elementary schools.

A champion of early childhood education, Karen brings her considerable expertise to ensuring equity and access for, and providing a level playing field in the policies governing, the nearly 500,000 public school children in New York City’s elementary schools.

As an educator, Karen strongly believes in professional development for school staff, and as a labor leader, in building capacity among members. Under her leadership, the UFT elementary school division has sponsored and hosted numerous educational initiatives throughout the city for teachers and students.

Karen’s belief in educating the whole child made her the ideal choice to lead the union’s innovative New York City United Community Schools initiative in 2012. Karen applies her mastery at guiding educators and partners to align strong academic programming with the socio-emotional supports for children, particularly those beset by need to achieve and thrive. Acknowledged in the national community school movement as a leader whose collaborative model is beginning to bear fruit, Karen advances the union’s philosophy that supporting successful education practices ultimately will result in better performing schools.

Responding to a growing need to acquaint and connect new members to the vast array of professional and union services available, particularly those who are school-based, Karen was recruited to direct the union’s New Teacher Initiative. With a laser focus on member retention, Karen together with professional developers from the UFT Teacher Center and department heads across the union introduced a series of workshops, communications tools, social gatherings, and more.

Prior to her election as vice president in 2008, Karen served as a chapter leader, a PM staffer in the UFT’s Brooklyn borough office, and in 2002, became a full-time educational liaison focusing on issues of certification and licensure.

A staunch advocate of the labor movement, Karen grew up in a union family. Committed to a life of service and educating children, Karen began her career in 1992 in Brooklyn at Ocean Hill-Brownsville’s PS 156, where she taught for 10 years. Having distinguished herself with her strong union advocacy, Karen was selected as the UFT District 23 representative in 2005.

Karen is a member of the New York State United Teachers Board of Directors, member of the Peer Intervention Panel and is chair of the UFT Disaster Relief Fund. She is a board member of the W.E. B. DuBois Institute and is the Youth Chair for the Coalition of Black Trade Unionists, Region One. She has, additionally, completed advanced labor union leadership training at the NYS AFL-CIO/ Cornell University Union Leadership Institute.

Karen has received both the UFT’s Albert Lee Smallheiser and Jules Kolodny awards for her union advocacy. She received her bachelor’s degree from Tufts University and her master’s from the New York Institute of Technology. 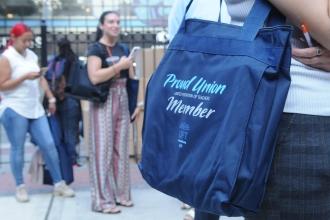 Your union is here for you

After recharging over the summer, we are excited to return to our classrooms to do what we do best. And we won’t let budget cuts or layoffs stop us from providing our public school students with a robust academic experience that includes the arts and social-emotional learning.