CTE Partner Of The Year Award

A high school where students do maintenance work on airplanes. An elementary school with a 3D printing design program. A student-created clothing brand that sells its merchandise from a student-run, brick-and-mortar store. These were just a few of the innovative Career and Technical Education programs represented by the honorees at the UFT’s CTE Awards Ceremony on March 15 at UFT headquarters in Manhattan.

The honorees and their guests filled Shanker Hall and spilled into overflow rooms. There was laughter, as well as tears and hugs, as CTE members celebrated both their work with students and the precious opportunity to gather in person once again.

“This is the first large event the UFT has hosted since March 13, 2020,” said UFT President Michael Mulgrew, “and I think it’s appropriate that it’s the group that always figures out how to get things done no matter the challenges.”

For UFT Vice President for Career and Technical Education Leo Gordon, the architect and emcee of the event, CTE represents the chance for educators to share their passion with young people while “giving students access to career growth and development in a not-so-equal system.”

Vita Vaccaro, a teacher at the HS for Fashion Industries in Chelsea, Manhattan, shared an example of Gordon’s insight: Her students, most from the outer boroughs and without prior connections in the fashion industry, visit the Viacom corporate office and meet with company employees every Friday. “First, they can’t visualize themselves in these spaces,” Vaccaro explained, “but when they have that experience, they realize they have a place there. They see the CEO in this meeting and think, ‘That could be me.’ ”

Industry partners like Viacom are always included in the awards ceremony because these partnerships are at the heart of CTE. “For schools to stay up to date with what’s going on in the industry, they need people in the field to volunteer their time,” Gordon explained. Partners offer “workplace opportunities, college connections, everything you can dream of,” he said.

Many honorees accepted awards for their work in the same schools they attended as teenagers. When Amanda Deebrah, a teacher at John Adams HS in Queens, accepted her CompTIA Award from her former CTE teacher Alex Bell, she joked that every time the two share a stage, she leaves tear stains on his shirt. Deebrah had accepted her high school diploma from Bell almost exactly 10 years earlier.

A new CTE Legacy Award, created to recognize someone who has “embodied CTE” for 20 years or longer, said Gordon, was presented posthumously to Theodore Gershon, who spent his career at the Consortium for Worker Education and died after contracting COVID-19. Gordon said Gershon “devoted his life to connecting underprivileged young people to workplace learning opportunities and workforce development.” Gershon lobbied to increase CTE funding, worked with CTE partners and often collaborated with the UFT.

Honorees and presenters shared countless student success stories. Torrance Hampton, the founder of CTE partner G-Factor Films, presented an award to Gerard D’Ambrosio, an automotive teacher at Tottenville HS on Staten Island. The two met when Hampton drove to Tottenville to film a promotional video about the school. D’Ambrosio’s students noticed a nail in the tire of Hampton’s car and fixed it before Hampton finished filming.

Donna Coppola, a UFT special representative on Staten Island, took the stage immediately after and, sporting a grin, said that the same thing happened to her when she drove to Ralph R. McKee CTE HS. “That’s CTE, and that’s Staten Island,” Coppola said.

The ceremony also recognized schools that expand the horizons of what CTE typically means. Jessica Danser, an alumna of and teacher at Talent Unlimited HS on the Upper East Side of Manhattan, accepted an award for her role as the workplace learning coordinator for the school’s CTE dance program.

Rather than focusing solely on technique and performance, the program exposes students to “multiple career points in the dance world,” said Danser. “They’re learning how to dance, but they’re also learning how to choreograph, direct, make costumes and run a dance company.”

The program has several impressive industry partners, including Brooklyn Ballet, Mark Morris and the Young Dancemakers Company. The goal is to make connections they can draw upon to pursue “different career paths within the dance industry,” Danser said.

As schools push the limits of CTE, Gordon said, they never lose sight of the basic principle: “If we utilize our passion and connect our young people to career pathways, they, in turn, will utilize their passion and create a prosperous future.” 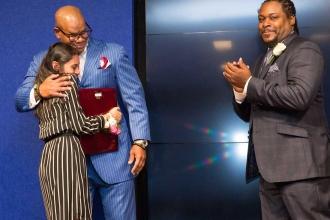 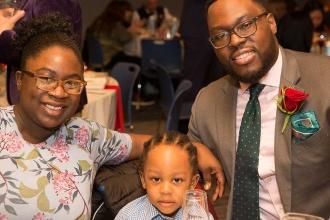 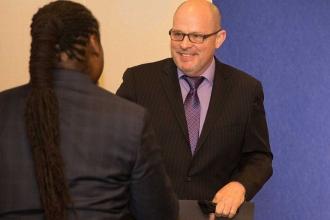 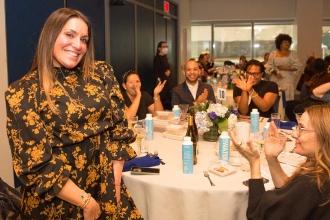 Vita Vaccaro, the honoree from the High School of Fashion Industries in Manhattan, is congratulated by her school colleagues. 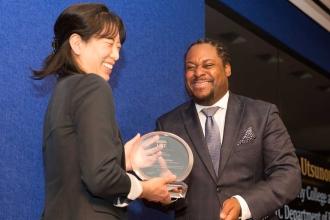 Reina Utsunomiya (left), the senior director of Early College and Career Schools, shares a laugh with UFT Vice President for CTE Leo Gordon, who presents her with a Special Recognition Award. 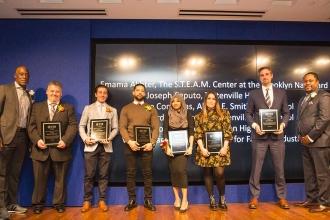 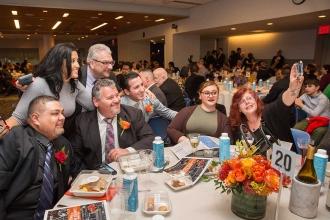 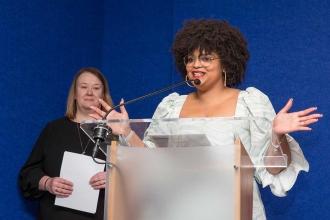 Kilsi Rodriguez, who teaches accounting at the Business of Sports School in Manhattan, accepts the Stanley Schair CTE Teacher and Work-Based Coordinator for Excellence and Innovation Award. Rodriguez later received the Teacher of the Year Award as well. 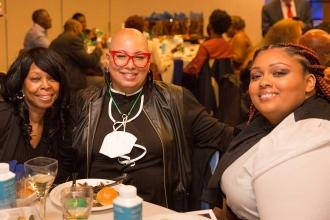 Vita Vaccaro, the honoree from the High School of Fashion Industries in Manhattan, is congratulated by her school colleagues.

Reina Utsunomiya (left), the senior director of Early College and Career Schools, shares a laugh with UFT Vice President for CTE Leo Gordon, who presents her with a Special Recognition Award.

Kilsi Rodriguez, who teaches accounting at the Business of Sports School in Manhattan, accepts the Stanley Schair CTE Teacher and Work-Based Coordinator for Excellence and Innovation Award. Rodriguez later received the Teacher of the Year Award as well.