What a wonderful ‘world’

Who says there’s no such thing as time travel? Thirty-six students and three teachers from Brooklyn traveled by train for only an hour on Oct. 18, but arrived in Corona, Queens, and found they’d been transported back to the mid-1900s, to the house where legendary trumpeter Louis Armstrong spent his last 28 years.

Described as a music virtuoso and master educator to visitors to the house, now a museum and National Historic Landmark, the jazz great is still imparting valuable lessons.

Armstrong lifted himself out of humble beginnings in segregated New Orleans, where he was born in 1901 in a two-room shack with dirt floors and no plumbing or electricity. He had less education than the 6th- to 8th-graders from PS/IS 155 in Ocean Hill Brownsville on the class trip. But music was all around him, and he bought a cornet when he was only 7. By his teens, he was playing with the biggest bands in New Orleans and before he turned 30, he was world-famous. 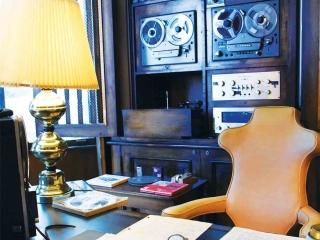 Miller Photography
Armstrong catalogued all of his recordings and then decorated the sleeves holding the reels with collage art.

Armstrong was the first African-American star to get featured billing in a Hollywood movie. A superstar for five decades, he had hundreds of televison and radio broadcasts and 35 movies to his credit. He could have lived anywhere. But he chose a working-class neighborhood where he appreciated being treated like a regular guy.

“We don’t think that we could be more relaxed and have better neighbors any place else. So we stay put,” Armstrong wrote in an unpublished manuscript found in the home.

Armstrong knew the value of kindness and generosity and that made him a beloved figure in the neighborhood. He didn’t want to show off so he kept the outside of his house simple. The inside of the house was another story, and it remains much as it was when Armstrong was alive:  gilded picture frames, gold-plated bathroom fixtures, then-state-of-the-art recording equipment, speakers in the bathroom, a kitchen featuring built-ins and turquoise cabinets — “a whole lot of comfort and happiness and the nicest things,” Armstrong wrote. And “mirrors everywhere,” a student pointed out.

Armstrong and his wife, Lucille, had two dogs, Trumpet and Trinket. When they start barking together, Armstrong wrote, “Oh, boy, what a duet.”

“Are they still alive?“ a student asked before doing the math. “What happened to them?” another wondered.

The house is full of artwork, including a portrait of Armstrong painted by fellow legend Tony Bennett. The living room’s treasures included fragile pieces like a vase from France and a statue from Japan, both gifts from dignitaries, but that didn’t stop Armstrong from having neighborhood kids over to watch TV and eat ice cream in the room after giving them music lessons outside on the stoop.

The class trip included music lessons, too. Students sat riveted as docent Ed Polcer, himself a celebrated cornet player who performed with Benny Goodman, demonstrated a trumpet and the similar brass cornet, shared a little about the instruments and then asked for volunteers to try them.

There wasn’t time for all the hands that shot up so students who weren’t selected to play shouted advice: “Try harder!” “Firm grip!” They learned it was harder than it looks to get out a note and size doesn’t matter: one of the biggest students had no success; a much slighter classmate got louder results.

In the den, where Armstrong catalogued and stored recordings — many in record sleeves he had decorated with collage art — students listened to him on tape say, “You have to appreciate all kinds of music.” That impressed math teacher Neal Last, who organized the trip. “Good musicians recognize it’s important to open up people’s minds,” he said.

Armstrong also talked on tape about the song “What a Wonderful World,” saying the lyrics reminded him of home: I hear babies crying, I watch them grow / They’ll learn much more than I’ll ever know / And I think to myself what a wonderful world.

“I heard that in a commercial,” one boy realized.

Seeing a stair lift, a student asked if Armstrong had used it. Docent Tony Lannen said Armstrong needed the chair after suffering three heart attacks. He showed a photograph of the musician in the lift.

“Notice how gaunt-looking he is,” but he’s still flashing his trademark smile, the docent said. “He had a jazz spirit,” a student said.