A trip back in time

The kindergartners who filed into the barn at the 300-year-old Queens County Farm on a frigid January morning seemed to know that they were stepping back in time. Stomping the snow from their boots, they took in the space with wide eyes and awed smiles.

The students were in the midst of a literacy unit called “Then and Now.” In their classroom at PS/MS 207 in Howard Beach, Queens, they had been comparing past and present and preparing to read a book called “Century Farm: One Hundred Years on a Family Farm,” which illustrates how a farm changes over time. They had come to the farm — the oldest working farm in New York State, and the only working farm in New York City — to witness some of those changes firsthand.

“We’ve talked about how some things on a farm stay the same over time, like food, and others change, like going from a horse and buggy to a tractor,” said kindergarten teacher Kalen Mikell. “So we’re making connections to our curriculum.”

For her students, those connections came to life during a workshop on the history of the farm led by staff educator Cassidy Kirch. 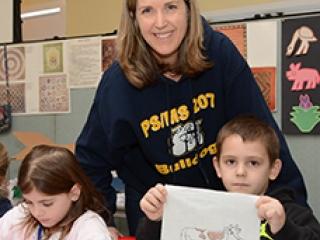 “Everything you eat or drink, ever, started on a farm,” Kirch proclaimed, to students’ astonishment. When Kirch announced the farm’s age — it dates back to 1697 — there were audible gasps.

Mikell observed that the trip had exposed her students to things they wouldn’t otherwise see, as they shouted out answers to questions about what they might expect to find on a working farm.

After their discussion of the farm’s history, students turned their attention to quilting as an example of American folk art that has spanned generations of farm life. They exclaimed, “Whoaaa!” as Kirch showed them examples of intricate quilt designs, comparing one sawtooth pattern to “monster teeth” and pointing out shapes in the fabric.

Finally, it was time for students to make their own quilt squares, carefully tracing farm animals onto cloth with permanent marker and coloring them in with fabric crayons.

“Mine is cool,” declared Kevin proudly as he filled in the spots on his cow.

Watching her students bent over their work, Mikell remarked, “I love how we’re so steady with our hands. We’re up to the challenge!”

When one student expressed frustration, Mikell seized the moment as a teaching opportunity.

“We don’t have to be perfect,” she said encouragingly. “What’s important is that we try our best.”

When their squares were complete, the kindergartners had one more important stop to make before getting back on the bus: to see the cow. After bundling up in their coats, hats and mittens, they eagerly trooped out into the snow, enthusiastically discussing their trip back in time.