We deserve a fair contract

Our 500-member negotiating committee met with the city on Oct. 13 for the first bargaining session on our new contract. Our entire team showed up dressed in UFT blue, making a powerful statement to city officials that we are united, prepared and ready to fight for the contract we deserve. I knew we had made an impact by the looks on the faces of the city and DOE officials as they walked into Shanker Hall.

After what we have been through during this pandemic, we are tired. But we are even stronger and more aware of what it is we need and deserve.

It’s our first contract negotiation since the outbreak of the COVID-19 pandemic and the first with this mayor and his schools chancellor.

We have been preparing for this round of bargaining for eight months. We have assembled a large rank-and-file negotiating committee that has representation from every UFT functional chapter and school division.

The 36,000 UFT members who filled out our contract survey in May have given us our marching orders. The negotiating committee is taking the priorities you set out in that survey and shaping them into the proposals that we will make across the table.

In no negotiation do you get everything you want. Bargaining is a give-and-take process. And for New York City public sector unions, there is another element: a long tradition of pattern bargaining. Once a large union sets the pattern for wage increases, it’s almost impossible for other unions to get more from the city.

In their opening remarks at the bargaining session on Oct. 13, city officials said rising health care costs will make it difficult for the city to afford pay increases for its workforce. Similar to the message it delivered to District Council 37, the city’s largest municipal union, during their first bargaining session in September, city officials told us that to get the raises we deserve, the UFT and its fellow unions in the Municipal Labor Committee need to be on the path to a health care agreement with the city that will achieve savings.

Rising health care costs have become a national crisis that cannot be ignored. But we made it clear to the city that we are prepared to fight to make sure we get the raises we deserve while avoiding health care premiums.

New York City is one of only a handful of municipalities that still offers premium-free health care to its employees, and the MLC has worked hard for years to protect this. We will continue to go after health care providers, insurance companies and hospitals to bring down costs.

The dedication of our large negotiating committee mirrors the dedication of our workforce. These 500 rank-and-file members come to UFT headquarters after a long workday and stay into the evening to make sure the voices of the membership are heard. In their subcommittees, they use the results of the contract survey along with their first-hand knowledge of their profession to formulate and prioritize bargaining demands.

Workers deserve to be paid a living wage that keeps up with inflation. If we want to attract and retain educators, if we want our school system to build itself back and thrive, educators need to be compensated fairly.

Together we will stand united as we demand a fair contract now. 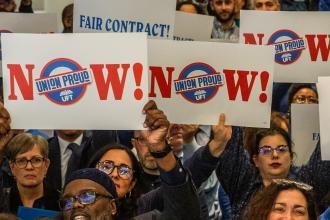 City officials entered Shanker Hall on Oct. 13 for their first negotiating session with the UFT to face the 500 members of the union’s bargaining committee all dressed in union blue in an impressive display of solidarity and strength.