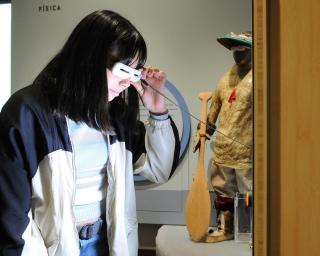 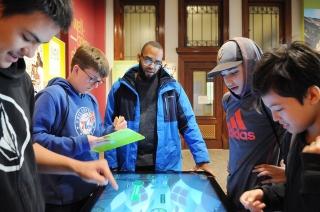 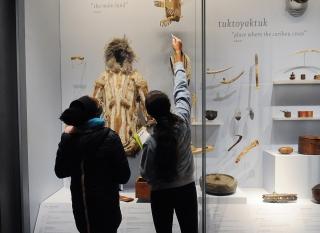 At the Smithsonian National Museum of the American Indian in Lower Manhattan, history lives behind glass. More than 700 artifacts tell the story of Native peoples, from a beaded Inuit parka to a Mapuche hand drum.

But on the museum’s lower level, in a space that opened in May 2018, Native American culture comes to life. The imagiNATIONS Activity Center gives adults and children alike the opportunity to explore inventions and innovations that have been the cornerstone of Native peoples for thousands of years.

“It’s a totally different perspective on what you see upstairs in the gallery,” said Gaetana DeGennaro, who helped to spearhead the center’s creation. “It’s a chance to see that Native people have always thought scientifically.”

For the 8th-graders in Jonathan George’s interdisciplinary “Explorations” class at MS 447 in Brooklyn, the activity center was an ideal place to learn about how Native peoples investigated the world around them to design inventions that would meet their needs.

“Our current unit is ‘Inventions for a Better World,’ so students are looking at how Native people used innovations to solve their needs,” George said. “The purpose is for them to think critically about their surroundings in the hope that it will influence their own inventions at the end of the unit.”

Students’ modern inventions tend to be high-tech. George described one student who envisioned a weapon that could be controlled remotely so that a police officer wearing a body camera might have his gun locked or unlocked by a third party monitoring the situation.

But the imagiNATIONS center gave students the chance to see how Native designs — some of which are still in use today — often made use of simple materials.

“It’s amazing how they used simple materials to create strong structures,” Leo said as he experimented with the rope. “It’s actually similar to the designs used on modern suspension bridges.”

For his own invention, Leo was contemplating a design for a plane that would rely on solar and wind power instead of fuel.

“It would be more energy efficient,” he said. “Native people used natural materials because it’s what was available at the time, but it was actually better because it’s less wasteful using what nature has to offer.”

On the museum’s upper floors, two students spent a long time intently studying an exhibit of ancient Native snow goggles and parkas. Then, downstairs in the activity center’s “Discovery Room,” they were given the opportunity to try out modern goggles, touch samples of the animal material used to construct the parka and even construct a model igloo.

“We want them to leave here with an understanding that Native culture is still present and they’re still innovating in the modern era; they’re not locked in the past,” said museum educator Jennifer Rolenz.

Students particularly enjoyed the “Crop-etition Challenge,” an interactive table that simulates planting Haudenosaunee crops, and the full-scale kayak in which they were tasked with maintaining their balance.

“It’s an interesting concept how it’s rounded so you can pop up out of the water even if you fall over,” said Autumn.

As they toured the museum and activity center, students used a chart to keep track of the Native inventions they saw. Then, George asked them to choose one to sketch and investigate in depth.

“What are the modern inventions that have been influenced by this?” he asked.

For Claire, it was an opportunity to think about the modern equivalent of a Native tool that bores holes into wood.

“It helped create fire through friction, like matches do today,” she said. “Without these inventions, we wouldn’t have what we have today.”