Fresh from the farm

Teacher Karen Rost (left) incorporates math and science connections in the bagging assembly line at PS 59 in Bedford-Stuyvesant, while Shaquila Gooden, the site coordinator, keeps the line moving across the room.

One 5th-grader at PS 335 in Crown Heights thought the fresh rosemary twigs she had never seen before looked like “Christmas trees.”

At PS 59 in Bedford-Stuyvesant, a 3rd-grader urged her classmate to smell the bright green spray of basil she was wiggling under his nose. Their classmates were discovering bok choy for the first time.

By mid-March, busy hands at seven UFT community learning schools and two other elementary schools in Brooklyn will be filling hundreds of grocery bags — destined for kitchens throughout the central part of the borough — with fresh fruits and vegetables as part of a project called Vital Brooklyn. Three additional schools will come on board before the end of the school year.

The UFT has formed a partnership with Governor Cuomo, the state Department of Agriculture and GrowNYC in the initiative, which brings New York State farm produce to communities that have been identified as some of the most disadvantaged in the state — with high rates of obesity, diabetes and high blood pressure — and where healthy food alternatives are scarce.

Parents and community members can order a large bag of fresh produce either weekly or semimonthly, depending on the school, and they pay an affordable $10 to $14 at the economically self-sustaining markets for a collection of items valued at $20 to $30.

While the goal is the well-being of the whole community, the project also stresses to parents the importance of providing healthy meals for children so they can succeed in school.

UFT President Michael Mulgrew said the initiative, which began in November, aligns with the community learning schools’ holistic approach to educating the whole child and meeting families at the point of their need. “Because schools are the hub of communities,” he said, “this initiative provides a model not only for the well-being of the targeted communities but for communities throughout the state and beyond.”

A 3rd-grader gets the right amount of fresh basil into the package.

A sprouting onion gets the attention of two 3rd-graders. 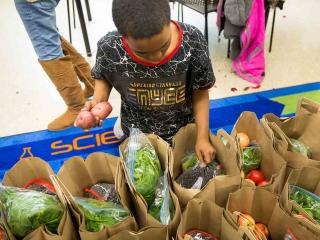 A student tops off a grocery bag with raw beans and potatoes.

Because the bags often contain “surprises” — herbs that may be unfamiliar, such as cilantro, and vegetables such as purple carrots and Swiss chard, along with more familiar produce like spinach and apples — recipes are included in each bag so the cook in the family can learn how to incorporate the new items into the family’s meals. A cilantro lime rice recipe was featured one week.

Parent Telmarra Tilman described the program as “right on point, convenient, affordable and healthy.” She was headed home from PS/IS 184 in Brownsville to try a recipe for apple-pear crisp.

The warm scent of fresh sage filled the room at PS/IS 184 as the soft grey-green herb was weighed, labeled and added to the 30 grocery bags earmarked for local kitchens. Chapter Leader Bernice Huggins, a customer and supporter of the school market, said in addition to improving eating habits, the program is teaching students about nutrition and encouraging good citizenship by including the students in the community effort.

Each school shapes its own program. At PS 59, 3rd-graders not only learn about new foods and the nutritional value of what goes into each week’s bags, but also apportion and fill the bags for Friday pickup as part of their classwork. PS 335 created a Civics Club of volunteer students to prepare its bags for pickup after school.

Expanding the program is each school’s goal. PS/IS 184 is already working to set up a market in neighboring PS/IS 141 and to include seniors at the nearby Brownsville Recreation Center in its customer base. And when warmer days arrive, the school is planning to have outdoor tables to better market the farm-to-table freshness of the produce.

The other participating schools are co-located PS 196 and MS 582 in Bushwick; PS 40 in Bedford-Stuyvesant; PS 599 in Ocean Hill; PS 135 in East Flatbush; and PS 158 in East New York. Schools that will begin the Vital Brooklyn program later in the year are MS 246 in Flatbush; PS 92 in Prospect Lefferts Gardens; and IS 68 in Canarsie.