Sailing back in time

“Ready on the halyard!

Fifth-graders from PS 194 in Sheepshead Bay, Brooklyn, repeated the cries that once echoed around the busy port of New York as they raised the sail on an 1885 cargo ship during a class trip to Manhattan’s South Street Seaport Museum on Oct. 7.

New York Harbor was once filled with the masts of tall ships, transporting goods from around the world to markets in the United States and beyond. Although those ships long ago sailed into history, the 26 students climbed aboard the Wavertree, which is permanently docked at Pier 16 as part of the museum, to learn what seafaring life was like more than 100 years ago.

In those days, you could spear fish in the East River, and oyster beds were abundant around the city’s coastline. “New York is a waterfront city, but many students aren’t aware of it,” said Laura Norwitz, the director of education for the museum, who greeted the students at the pier.

For teacher Ivis Carrasco, the ship was a perfect complement to her classroom lessons on how land masses separate and on who started exploring and why. The hands-on experience of ship life was an added bonus. “It’s really nice that the students have activities on the ship,” she said.

“Plant your feet,” Manski instructed the first group of students as they grabbed the rope. “Then reach forward and pull.” Under her direction, they repeated the cries from long ago. And as the sail came into view, students waiting their turns gazed up in wonder.

“Imagine all the masts in full sail,” Manski said. Ship crews exerted great energy on sails that weighed “tons and tons,” she said. Later, students and teacher joined in the task of “walking the capstan,” the machine that helped the crew reel in the rope for the sails.

The exercises showed students how important teamwork was on a ship. Living in tight quarters, everyone had to get along.

The students were delighted to learn it wasn’t unusual for crew to have pets on board, including cats, dogs and even pigs. A cat might be “like a member of the family,” one student said, but Manski said cats had a job to do, too: protecting the ship’s food supply from mice and rats.

Winding their way through narrow staircases, students visited the captain’s quarters, with beautiful wood-paneled walls. From the Wavertree’s midship or cross-section, they viewed the massive cargo hold that once carried spices, fabrics and other goods from ports in Europe, Latin America and Asia. They learned that beaver skins were highly prized for warm, waterproof outerwear, and that guano (bird excrement) from Chile was sought for its rich fertilizer properties. “Bird poop was considered as precious as gold,” Manski explained. The cargo hold also had a large metal container for fresh water — a necessity for safe drinking and washing.

Manski said crew members were often at the mercy of the captain, who could get away with everything from not carrying enough fresh water (to save space for revenue-producing cargo) to carrying out capital punishment for any offense. That changed by the late 1890s, when crews unionized. “Before the union, people could be punished for anything,” Manski said. “Now with a union, working on a ship was a job you might want to have.”

The crew had more control over the kind of work they did, working conditions improved, there were opportunities for advancement — and capital punishment on the high seas ended.

The day aboard the Wavertree was a memorable way to learn.

“I liked when we put up the sail,” said Shaniyah, 10, who pulled on the rope from up front, exactly where Manski said it would be hardest.

The captain’s area also captured Shaniyah’s imagination. “It looks like a room on the Titanic,” she said.

Obaid, 10, said he would consider working on a ship. “I like how they operated the ship and how they raised the sail.” Miguel, also 10, said, “You could work yourself up to a captain.”

Norwitz, the museum’s education director, said K–12 class trips can cover everything from transportation and New York history to economics and the business of supply and demand. “Students come to us from a lot of different places,” she said. “We tweak our program to match what they’re studying.” 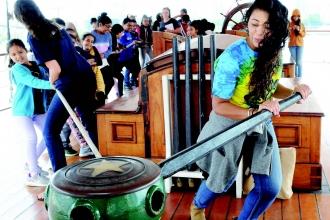 Teacher Ivis Carrasco (right) from PS 194 in Brooklyn turns the capstan — the machine that reels in the rope for the sails — on board the Wavertree. 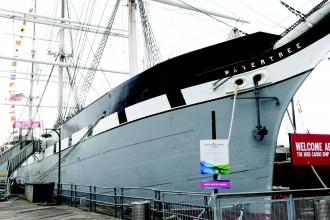 Students get to explore this 1885 cargo ship.

Students take turns at the ship’s wheel on board the Wavertree at the South Street Seaport. 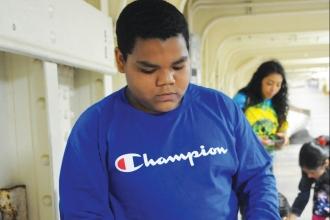 A student examines a rope aboard the ship. 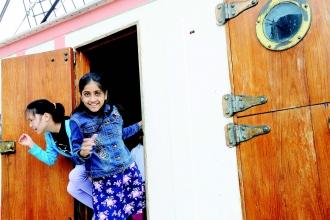 Teacher Ivis Carrasco (right) from PS 194 in Brooklyn turns the capstan — the machine that reels in the rope for the sails — on board the Wavertree.

Students get to explore this 1885 cargo ship.

Students take turns at the ship’s wheel on board the Wavertree at the South Street Seaport.

A student examines a rope aboard the ship.