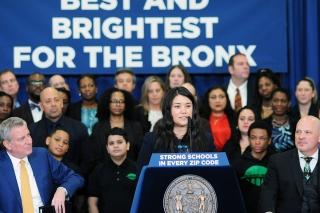 Fifty schools in the Bronx, East New York, Brownsville and Far Rockaway will join the Bronx Collaborative Schools Plan, an initiative that empowers educators at these schools to drive school improvement.

“This is not change from the top down, but from the bottom up,” said UFT President Michael Mulgrew at the Feb. 8 press conference to launch the new program. “It moves decision-making powers and resources inside schools. And it focuses on schools that historically have not gotten their fair share. Our job is to support your vision.”

Carranza vowed to help teachers and principals who are taking on the challenge of change in their schools. “I have got your back,” said Carranza, who joined Mulgrew, Mayor Bill de Blasio and a number of principals and chapter leaders from Bronx Plan schools at the Highbridge Green School in the Bronx for the announcement.

The initiative, which will involve up to 120 schools by the third year, was negotiated as part of the new DOE-UFT contract. Most of the schools in the first cohort are from the Bronx, with 11 from central Brooklyn and seven from Queens. Both the principal and the chapter leader had to sign off on joining the program.

“The Bronx Plan gives us an important place at the table where decisions are made that affect teachers and students,” said Highbridge Green School Chapter Leader Erin Sonoda, an English as a New Language and science teacher. The school’s principal, Kyle Brillante, said he envisioned more student field trips and after-school programs as well as stronger math and literacy instruction. Schools were deemed eligible to apply based on staff turnover rate, student achievement, the number of students with special needs and whether there was sufficient trust among school faculty, among other factors.

A school committee of six to 12 members (half appointed by the principal and half picked by the school’s chapter leader) will collaboratively develop strategies to improve student performance and school climate. Schools will receive additional funds and strategic support to carry out their plans. Bronx Plan schools may also be able to offer a “hard-to-staff differential” of up to $8,000 to attract and retain educators in hard-to-staff subjects.

Meryandree Luna, the chapter leader at the Fordham Leadership Academy for Business and Technology, said she hopes her school’s participation in the Bronx Plan will improve teacher retention and enable the school to offer college and career counseling at every grade level.

Richard Sellati, the chapter leader at MS 424/the Bronx Academy of Multi-Media in Hunts Point, said the program will give his school the opportunity to address student needs “in a more efficient and localized manner — more tailored to our community.”