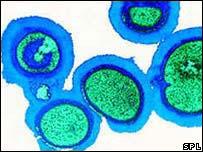 Staphylococcus is a family of common bacteria.

Many people naturally carry it in their throats, and it can cause a mild infection in a healthy patient.

MRSA stands for methicillin-resistant Staphylococcus aureus, but is shorthand for any strain of Staphylococcus bacteria which is resistant to one or more conventional antibiotics.

Experts have so far uncovered 17 strains of MRSA, with differing degrees of immunity to the effects of various antibiotics.

Two particular strains, clones 15 and 16, are thought to be more transmissible than the others, and account for 96% of MRSA bloodstream infections in the UK.

At present, these strains are thought to be rare in other countries, but are spreading.

Antibiotics are not completely powerless against MRSA, but patients may require a much higher dose over a much longer period, or the use of an alternative antibiotic to which the bug has less resistance.

What are the symptoms?

MRSA infections can cause a broad range of symptoms depending on the part of the body that is infected. These may include surgical wounds, burns, catheter sites, eye, skin and blood.

Infection often results in redness, swelling and tenderness at the site of infection. Sometimes, people may carry MRSA without having any symptoms.

Why does MRSA exist?

It's all about survival of the fittest - the basic principle of evolution, and bacteria have been around a lot longer than us, so they're pretty good at it.

There are countless different strains of a single type of bacteria, and each has subtle natural genetic mutations which make it different from the other.

Some strains' genetic makeup will give them a slight advantage when it comes to fighting off antibiotic attack.

So when weaker strains encounter antibiotics, they die, while these naturally resistant strains may prove harder to kill.

This means that next time you encounter Staph, it is more likely to be one which has survived an antibiotic encounter, ie a resistant one.

The advice from doctors who give you antibiotics is always to finish the entire course - advice which many of us ignore.

When you don't finish the course, there's a chance that you'll kill most of the bugs, but not all of them - and the ones that survive are of course likely to be those that are most resistant to antibiotics.

Over time, the bulk of the Staph strains will carry resistance genes, and further mutations may only add to their survival ability.

Strains that manage to carry two or three resistance genes will have extraordinary powers of resistance to antibiotics.

The reason that hospitals seem to be hotbeds for resistant MRSA is because so many different strains are being thrown together with so many doses of antibiotics, vastly accelerating this natural selection process.

Why is it so dangerous?

It is a fact of life in the NHS that patients are at higher than normal risk of picking up a Staph infection on the wards.

This is for two reasons - firstly, that the population in hospitals tends to be older, sicker and weaker than the general population, making them more vulnerable to the infection.

Secondly, conditions in hospitals, which involve a great many people living cheek by jowl, examined by doctors and nurses who have just touched other patients, are the perfect environment for the transmission of all manner of infections.

Staph infections can be dangerous in weakened patients, particularly if they can't be cleared up quickly with antibiotic treatments.

MRSA infections can prove tough to treat because they are resistant to treatment, making them more dangerous than a simple case of Staph.

What is likely to happen in the future?

Doctors are very worried about what the future holds for MRSA.

The number of reports of MRSA infections rises year by year - and the latest evidence suggests that deaths due to MRSA are increasing at a similar rate.

Already, the spectre of a bug resistant to all antibiotics is approaching.

VRSA, or vancomycin resistant Staphylococcus Aureus, has acquired resistance to a drug considered the "last line of defence" when all other antibiotics have failed.

The UK has already seen several cases of GISA, or glycopeptide intermediate Staphylococcus aureus, a kind of "halfway house" between MRSA and VRSA, which has developed a resistance to antibiotics of the vancomycin family.

Although new antibiotics are being developed all the time, pessimistic experts believe it is only a matter of time at current rates until virtually every weapon in the pharmaceutical arsenal is nullified.

Nihilists suggest that there could come a point at which bacteria retake the upper hand, and doctors, as in previous centuries, have no answer to some bacterial infections.

It should be noted, they say, that humans have only had the upper hand over bacteria for a handful of decades - we have no right to expect that situation to last forever.

What can we do about it now?

The government is already trying to at least slow down the apparently relentless march of the bacteria.

One of the main reasons behind their swift evolution into "superbugs" is the overuse of antibiotics, both in human and veterinary medicine.

Until recently, patients visiting their doctor with a viral infection might demand, and be given an antibiotic prescription - despite the fact that antibiotics have no effect on this.

All those patients were doing was strengthening the communities of bacteria in their bodies.

Doctors have now been told to cut antibiotic prescribing.

Hygiene is another tried and tested way of at least protecting the most vulnerable patients from the most dangerous strains.

Hand washing between patients should be a must for doctors and nurses, or they are simply doing more harm than good in their trips around the wards.

Ministers are trying to improve overall standards of hygiene, perhaps by reintroducing the concept of the ward matron, with responsibility for cleanliness.

New patient bedside phones are being introduced that include speed dial buttons to alert staff to the need to deal with a hygiene problem.

Whether a dirty ward rather than a dirty hand is a reservoir for Staphylococcus is a matter of debate.

But MRSA patients are also increasingly being treated in isolation where possible.

In the long run, many experts suggest it may take a breakthrough akin to the discovery of penicillin before humans can regain a temporary upper hand over the bugs again.