DOE to remove PCB fixtures by 2016 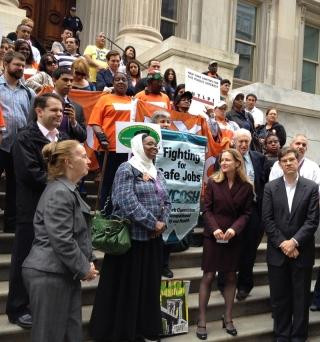 Following alarming incidents of leaking and smoking PCB-laden light fixtures in New York City public schools this spring, the Department of Education agreed on May 22 to cut in half its time frame for replacing them.

The agreement to replace all the toxic light fixtures in the remaining 654 city schools that have them by the end of 2016 came as part of a settlement of a federal lawsuit filed by New York Communities for Change two years ago. The DOE had previously insisted that it needed through 2021 to complete the work.

The UFT has always advocated for a two- to five-year timeline for replacing the fixtures.

“This is great news for all the students and teachers and staff in New York City schools,” said UFT President Michael Mulgrew. “It’s a shame that everyone has to go to court to get the city to do the right thing.”

Parents, community and union members, local elected officials and environmental activists gathered outside DOE headquarters on May 22 to celebrate the victory. They vowed to keep the pressure on the DOE to ensure that the new timetable is followed.

Parent Celia Green, one of the lead plaintiffs in the lawsuit, was in her child’s school, PS 368 in Brooklyn, when a light fixture with PCBs leaked on May 2. “The smell was putrid, the smoke started pouring out, and thank God the staff got all the children into the auditorium,” she said. She likened the fixtures to “ticking time bombs.”

On May 7, 11 students and a teacher were hospitalized after a light fixture began emitting smoke at PS 123 in Harlem.

The city had initially tried to have the lawsuit dismissed, a course of action that the presiding judge decried as “without merit” and filled with “arguments that were often deceptive or illogical.”

But after the two high-profile incidents in May and with pressure mounting from the publicity and outcry that ensued, the DOE announced that it would speed up its initial 10-year timeline.

Jonathan Westin, the executive director of New York Communities for Change, thanked the UFT for the major role it played in “advocating for removing the fixtures and reporting when the lights were leaking.”

The new five-year timeline is precisely what had been originally requested by the U.S. Environmental Protection Agency when the lighting fixtures with PCBs were first discovered in New York City public schools in 2010.

Natasha Capers, a parent and member of New Yorkers for Great Public Schools, called the victory “hard fought but bittersweet,” saying that it should have happened years ago.

“There’s no reason we should have to stand on the steps here to get toxic chemicals removed from public schools,” Capers said.