When Margaret Negrelli, the chapter leader at PS 370 in Brighton Beach, Brooklyn, attempted to get the COVID-19 vaccine on her own, her doctor said it would be a while before she would have access to it and urged her to sign up for any program available. Not long after, she received an email from the UFT asking her if she was interested in getting the vaccine through the union’s new distribution network.

“A couple of days after that, I received an email saying I was matched with NYU Langone and the next day I received an appointment, with options on where to go for the vaccine,” said Negrelli, who received her first dose on Jan. 13. “The union came through with flying colors.”

Negrelli is one of more than 25,000 teachers and other educators who have told the UFT they are interested in receiving the vaccine right away as part of the UFT program to accelerate distribution of the vaccine to its members. Another 2,000 have said they will get it in the future. By early February, nearly 13,000 members had been matched to a provider.

Given the vaccine shortage, the union gave priority to in-service members who currently have an in-person school assignment. But the objective was to make the vaccine available to as many members as possible so no vaccine is left sitting on the shelf.

The UFT vaccine program connects members directly to either NYU Langone Health or EmblemHealth’s AdvantageCare Physicians, eliminating the need for members to search for vaccine locations on their own.

“It’s very easy to sign up,” said Lauren Gottlieb-Mora, an in-person teacher at PS 151 in Astoria, Queens, who was also matched with NYU Langone Health and received the vaccine on Jan. 15. “I felt the union had a magic wand. I was so impressed with the organization of the program that I wrote a letter to Mr. Mulgrew.”

The UFT program supplements other city vaccination sites, which educators can also use.

Natalie Hookway, an occupational therapist at K141@IS71 in Prospect-Lefferts Gardens in Brooklyn, received the first of the two COVID vaccines on Jan. 11 at a city site.

“I’m starting the journey of being protected from this horrible virus,” she said.

Pedro Dones, a math teacher at the MS 363/Academy for Personal Leadership and Excellence in the Fordham section of the Bronx, made his way to the North Central Bronx Hospital, also as part of the city’s vaccination program, to be immunized on Jan. 11. “I was born there, so it was fitting,” said Dones, a winner of the city Department of Education’s Big Apple Awards in 2020.

Dones waited three hours to get the vaccine, but he wasn’t complaining. “I waited 10 months for this; I could wait three hours,” Dones said. He urged anyone on the fence about the vaccine to “speak to a doctor you trust.”

Middle schools, which have been remote since mid-November, are scheduled to reopen on Feb. 25. Dones is eager to get back to the classroom.

“If this gets me one step closer to being with my kids again — which is what I live for — I’m taking the vaccine,” said Dones. “I miss my kids. I need them as much as they need me.” 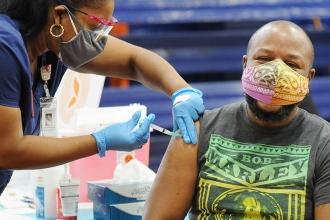 We answer some of your most common questions about immunization and the UFT’s COVID-19 vaccine distribution program for members.