The UFT is mobilizing its members to get out the vote for the November election during one of the most challenging periods in the nation's history.

As the tragic human toll of the coronavirus mounts, the pandemic's damage to state and local budgets is also growing and the federal government has largely failed to provide relief. The UFT is working to elect Joe Biden for president and other candidates up and down the ballot who support the union's education, economic and labor agendas.

"Every day — practically every hour — highlights the importance of this election to our nation, to our members and to the school communities where we work," said UFT President Michael Mulgrew. "We are already mobilizing our members, both retired and active, in key districts in New York City, and we are working with our retired members and other union members across the country to help move key races nationwide."

The UFT trained 180 New York City-based volunteers from the union's Retired Teachers Chapter to call voters to support Biden and his running mate, Sen. Kamala Harris. These volunteers began making calls to UFT retirees and other union members living in the battleground state of Florida. On Oct. 12, they expanded their outreach to include union members in the swing state of Pennsylvania.

For Mitchell Friedman, a UFT retiree who participated in the union's phonebank, the election is important enough for him to overcome his shyness about cold-calling strangers. "It was way outside my comfort zone," said Friedman.

Friedman said he got involved because "this election is probably the most important election of our lifetime."

Encouraging voters to vote for Biden, he said, gave him the chance to make a difference. "I'm doing my part for our democracy," said Friedman. "It's a small part, but I'm putting the better candidate before possibly undecided voters."

Starting in early October, the union began recruiting and training in-service UFT members to make calls during the final weeks heading into Election Day. The union has also activated its political action team to join the phone-banking campaigns launched by NYSUT and the AFT, the UFT's state and national affiliates.

"Remind your friends, your relatives, your houses of worship, your book clubs, whoever you can, to vote," said Mulgrew. "No one can sit on the sidelines." 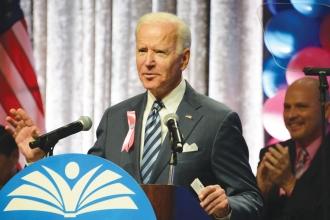 As you vote, remember: Joe Biden gets us

Looking through the lenses of education policy and labor issues, the best candidate for president is Joe Biden — someone who is focused on our dignity, pay, benefits and the workplace protections we deserve.