The city and its Department of Education (DOE) have appealed an Aug. 5 court ruling that invalidated the City Council’s vote on the education portion of the 2022-23 budget, while the Council considers legal options to restore the funding cuts.

State Supreme Court Justice Lyle Frank issued the ruling the day after a hearing on the lawsuit, which was filed by two educators and two parents. Lawyers for the city and the DOE immediately appealed the decision.

City Council Speaker Adrienne Adams said in an Aug. 5 statement that the Council wants a solution that will restore the funds and ensure DOE accountability.

“The Council is considering a full range of legal actions to take in the coming days to ensure DOE permanently restores school budgets, is accountable to the public, and completely transparent about all relevant budget information and detailed accounting of the status of its remaining federal stimulus funds,” the speaker said.

While the city and DOE officials say the cuts amount to $215 million, Comptroller Brad Lander has found they total $469 million and hit 77% of public schools. About 350 schools received additional funding, for net reductions of $373 million, he said.

The Aug. 4 hearing took place while hundreds of parents, students, education advocates and UFT members braved the sweltering heat in Foley Square to protest the cuts.

"Supreme Court Justice Lyle Frank is siding with parents and educators by calling for a 'do over' vote on the city Department of Education budget," UFT President Michael Mulgrew said. "It's time for Mayor Adams to use the federal education dollars New York City is sitting on to restore the full funding to our schools."

Frank ruled that the city violated state education law with the timing of the budget approval in June. The Panel for Educational Policy, the city's board of education, is supposed to approve the education budget before the full budget goes to the City Council. But Schools Chancellor David A. Banks had issued an "emergency declaration" to alter the timeline, and the panel voted nine days after the City Council adopted the budget.

Adams' initial budget proposal included reductions of $215 million in Fair Student Funding, which is allocated based on enrollment. The loss would have been higher but the DOE used $160 million in federal stimulus funds to reduce the total.

Last month, a supermajority of Council members signed a letter urging the mayor to use unspent federal stimulus money to restore the cuts. Students, teachers and parents need finalized budgets to "ensure they are on track for a smooth opening next month," the mayor said in a statement after the hearing.

Fabien Levy, his press secretary, said on Aug. 5 that Adams and Banks “are committed to providing every available resource to our students to provide them with the best education possible, and that is what this budget does.”

Banks and Adams had announced a few days before the hearing that the DOE is freeing up $100 million in stimulus funds set aside for academic recovery, which could be used to fund teaching staff. They are also reallocating about $50 million reserved for school budget appeals and adjustments.

At the Foley Square rally, UFT members joined the Alliance for Quality Education, Make the Road NY, Class Size Matters and other groups that oppose the cuts, which would impact staffing and lead to larger class sizes, as well as fewer arts and music classes, enrichment classes and afterschool programs.

"What purpose do these cuts serve other than to cause harm and exacerbate the existing inequity in our education system," said plaintiff Tamara Tucker, a parent of two children at PS 125 in Harlem. The other plaintiffs are Brooklyn parent Melanie Kotler; Sarah Brooks, a teacher at PS 169 in Brooklyn; and Paul Trust, a music teacher who was excessed from PS 29, also in Brooklyn.

Richard Mantell, the UFT vice president for middle schools, said the union stands in solidarity with the plaintiffs.

"The mayor can't keep calling us clowns and ignoring what we have to say," Mantell told the crowd, referring to a term the mayor has used to denigrate parents and educators who have protested the cuts. "We have to remind him that we elected him." 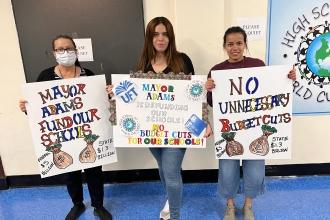